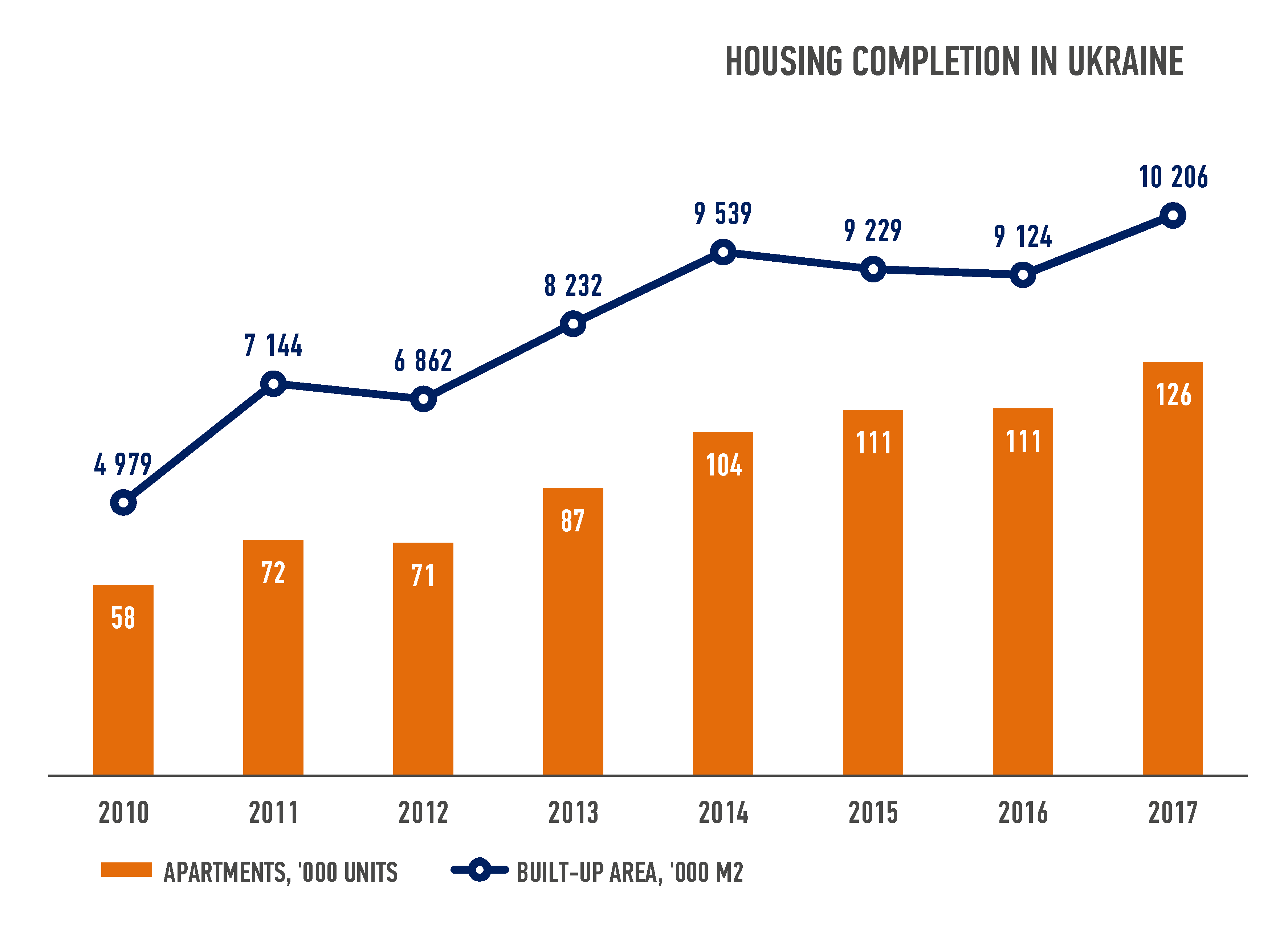 The dynamics in housing put into use in Kiev region shows considerable input volumes when compared to other regions. Thus, over the past 10 years, in Kiev region (Kiev city + Kiev agglomeration), 28 million square meters of housing was put into use, which is 28.6% of all housing put into use in Ukraine in the period. It is followed by Lviv region (8%), then Odessa (7.2%) and finally Ivano-Frankivsk (6.2%). Customers in such conditions are becoming pickier and they are seeking some kind of ‘zest’ in the project. We can see an increase in supply and hence a saturation in the housing market.

Demand for housing is generally influenced by many factors such as political and financial stability in a country, legislation and the development of the mortgage system. Among major factors affecting demand for housing is the income level of the population and the affordability of housing. Housing affordability is what characterizes the ratio of income to housing costs. There are several ways to calculate this indicator. We have used the UN-Habitat methodology to assess housing affordability, indicating the period necessary to purchase housing provided all incomes are savings. This indicator shows the balance of the cost of housing and the income level of the population. The basic indicator in the calculation is a household consisting of three people and a home (apartment) of 54sqm. In our research, income was calculated for three working members of the family. We have calculated this indicator on the basis of income indicators of the population for 2016 and housing indicators at the end of 2016 according to UVECON[1]. The cost of housing was taken based on the average cost per square meter of housing in regional centres.  For Kiev region, such value was established as the average price indicators of the cost of residential units in the satellite cities of Kiev and in the settlements of the Kiev-Svyatoshinsky area.

Buyers investing in new housing today also include people aged 25-35. According to experts, about half of buyers are young people connected with the IT industry, having the appropriate funds. State programs last year began to revive a bit, but their impact on the housing market is almost non-existent.

The Ukrainian housing market is rather saturated. Market experts say that demand for housing has now sharply fallen, evidenced by the frequent loyal offers of builders for buyers and the low volumes of mortgage lending. According to consulting company CDS, in early 2017 housing supply exceeded demand (number of transactions) by 10 times[2]. Independent expert Jaroslav Tsukanova says that supply exceeds demand by 18-20 times[3].

Looking at the housing market prospects in the capital city, the mayor of Kiev, Vitali Klichko, suggested a collapse due to the large number of new residential projects[4]. As per information he published last year, about 60,000 apartments in Kiev from developers are unsold and empty.

At the same time, the director of developer Львовской Мечты (‘Lviv Dream’) says that they have enough buyers and homes are being sold at the level of construction of 4-5 floors, so last year the company was engaged in the construction of completely sold objects[3].

It is extremely difficult to expect growth in housing prices in such conditions. Despite the increase in construction costs caused by a hike in prices for fuel and building materials in 2018 (by 27%) compared to 2017 (according to the Ministry of Regional Development), an increase is not necessarily expected in the cost of housing in the primary market. Although some experts predicted drop in prices (8%-10%) in the primary market, it seems unlikely as within the framework of developed competition, the price level of housing sales has already reached a practical minimum. At the same time, falling prices in the secondary market are highly likely in the current situation.

The most likely scenario in the housing market in the current situation of overheating is a gradual deceleration. A sudden market collapse is unlikely. Gradually, market saturation will realize and a sharp growth in demand should not be expected.

Detailed housing market forecast on Ukraine is available in the EECFA Forecast Report Ukraine that can be purchased here.

In this situation, one can assume the more supportive measures for the market by the state and local authorities through increasing the effectiveness of mortgage programs, eliminating additional administrative barriers in housing construction, in particular those for obtaining permits, cheaper credit resources for the construction industry, reduced costs for land acquisition, reduced fees for connection to utility networks, infrastructure development of plots, and so on.

Such circumstances will require developers to make decisions to preserve demand. One should expect non-price benefits such as energy-efficient technologies, interesting infrastructure solutions in adjacent areas and public spaces, and obtaining additional bonuses, among others. Investors can only predict more favourable conditions for investments in residential real estates.

[3] Prospects of the real estate market in 2018: the square meter will rise in price: https://dyvys.info/2018/02/12/perspektyvy-rynku-neruhomosti-2018-chy-podorozhchaye-kvadratnyj-metr/