While in the EECFA Forecast Report Russia we estimate/forecast residential output, this article is looking at another angle of predicting housing market developments: demand potential in the Russian housing market (the number of households able to buy housing) as the main indicator of further market dynamics. Positive macroeconomic indicators in Russia currently are suggesting growth in real incomes and an increase in the population’s solvency, which in the near-term future is set to raise the number of households able to buy housing. This growth in demand potential will have a positive impact on residential output, yet, this is not something that will happen overnight: the Russian housing market is predicted to continue to slump for the time being. Nevertheless, the predicted growth in demand potential will play a major role in halting this drop, leading to an expansion in the housing market in 2019.

The state of the housing market primarily depends on the ability of the population to purchase housing. Other market factors, such as the volume of supply in the market, the level of competition or the cost of housing are secondary. It is the ability of citizens to buy housing that ultimately determines the total volume of effective demand, which in turn regulates development activity and price trends in the local housing market. At the same time, the indicators of the population’s need for housing are also secondary in terms of the dynamics of the market situation; they are of an abstract nature and cannot be used to predict the situation in the market. The need for housing is a conditional market potential, which, without the ability to buy housing is never realized. The ability of the population to purchase housing is the real market potential, which – in most cases – is realized in transactions. The level of housing provision (need) affects only the nature of demand: investment purchase, purchase of a first home, improvement of housing conditions, among others.

The key unit for measuring demand potential in the housing market is households. When making decisions about a major purchase, citizens consider the opinion of those close to them and often accumulate joint resources. The acquired real estate is ‘used’ by all participants of the transaction, so it is advisable to use the term ‘household’ and to consider the market situation through it.

Thus, the dynamics of the number of households able to purchase housing is the main indicator of the development of the whole housing market. The forecast of the absolute number of such households makes it possible to determine in which direction the market will move and to establish the dynamics of its key indicators. The basis for implementing such forecast for the development of housing markets is macroeconomic indicators (GDP, consumer price index, population, interest rates on mortgages). Any housing market essentially depends on the overall economic situation in a country or region, and is in direct correlation with macroeconomic indicators, which makes it possible to predict the indicators of the housing market in the long term, based on the dynamics of the former. Demand for housing considerably depends on the solvency of potential buyers, which consists of the level and ratio of their income and expenses, as well as the availability of credit instruments (mainly mortgage). For the forecast, we need the potential number of transactions involving mortgages, plus transactions without the use of mortgages. Their sum will illustrate the general dynamics of the population’s activity and provide basis for forecasting other important market indicators.

In general, the logical scheme of the forecast looks as follows: macroeconomic conditions > income level of population/availability of credit instruments > demand potential in housing market (number of households able to purchase housing) > share of the realization of the potential (percentage of potential transactions becoming real) > number of transactions > general condition of housing market. The methodological basis of the forecast is mathematical statistical methods: correlation and regression analysis, as well as the method of lognormal distribution.

Current expectations of national financial regulators (The Central Bank of the Russian Federation (CBR), The Ministry of Economic Development) allow us to conclude that the Russian economy has overcome the recession and is to enter a moderate, but stable growth path in mid-term. Positive GDP dynamics and reaching targeted inflation rates should contribute to growth in real incomes of the population and thus increase its solvency. The gradual reduction of the key rate of the CBR has already led to negative dynamics in housing loan rates. In mid-term, we can expect the gradual rise in the availability of mortgage lending to continue.

The main volume of growth in the number of households will likely be realized for households having access to a mortgage loan: their share in the total volume of potential demand will remain stably high, at about 91% on average in 2016-2019. At the same time, the share of households able to buy homes on own funds (without resorting to borrowings) should only be about 9%. Mortgage – in the medium run – is set to remain the major means to purchase residential units in Russia, and the dynamics of main conditions for mortgage lending will also depend on the volume of demand for housing.

While maintaining the share of potential demand (the share of actual transactions against potential ones) at current level (4.3% at end 2015 and 3.8% in 2016 – it is believed to return to the values of 2015 in the future), the number of transactions in the primary housing market in Russia should go up from 620 thousand units in 2016 to 980 thousand units in 2019. Considering the projected dynamics of the population and the volume of purchased housing for the period of 2016-2019, the indicator of total average residential area per square meter per person should also rise significantly, reaching the level of 27.3 sqm/person in 2019, (24.8 sqm/person in 2016); that is, a little closer to the target value of 30 sqm/person declared in public housing programs.

Therefore, with a moderate growth in the Russian economy, we can expect a stable development in the housing market. Any macroeconomic shocks (for example, the one similar to the events at the end of 2014) should immediately have a negative influence on the ability of citizens to buy housing and should lead to a drop in the number of transactions as well as a general decline in the volume of construction market. However, a pessimistic scenario is unlikely to date.

Nonetheless, the positive dynamics of demand potential cannot have an immediate effect on residential output. The ability to buy housing does not translate to real transactions instantly since developers need time to respond to the rise in purchasing power and to increase the volume of investments in new projects. Therefore, in 2017-2018 the Russian housing market is set to show a certain inertia and is predicted to continue to decline, though at a slower rate (more details in the current/previous EECFA reports). In this respect, the forecasted growth in demand potential will be the main reason for stopping the falloff, and the housing segment could expand again in 2019. 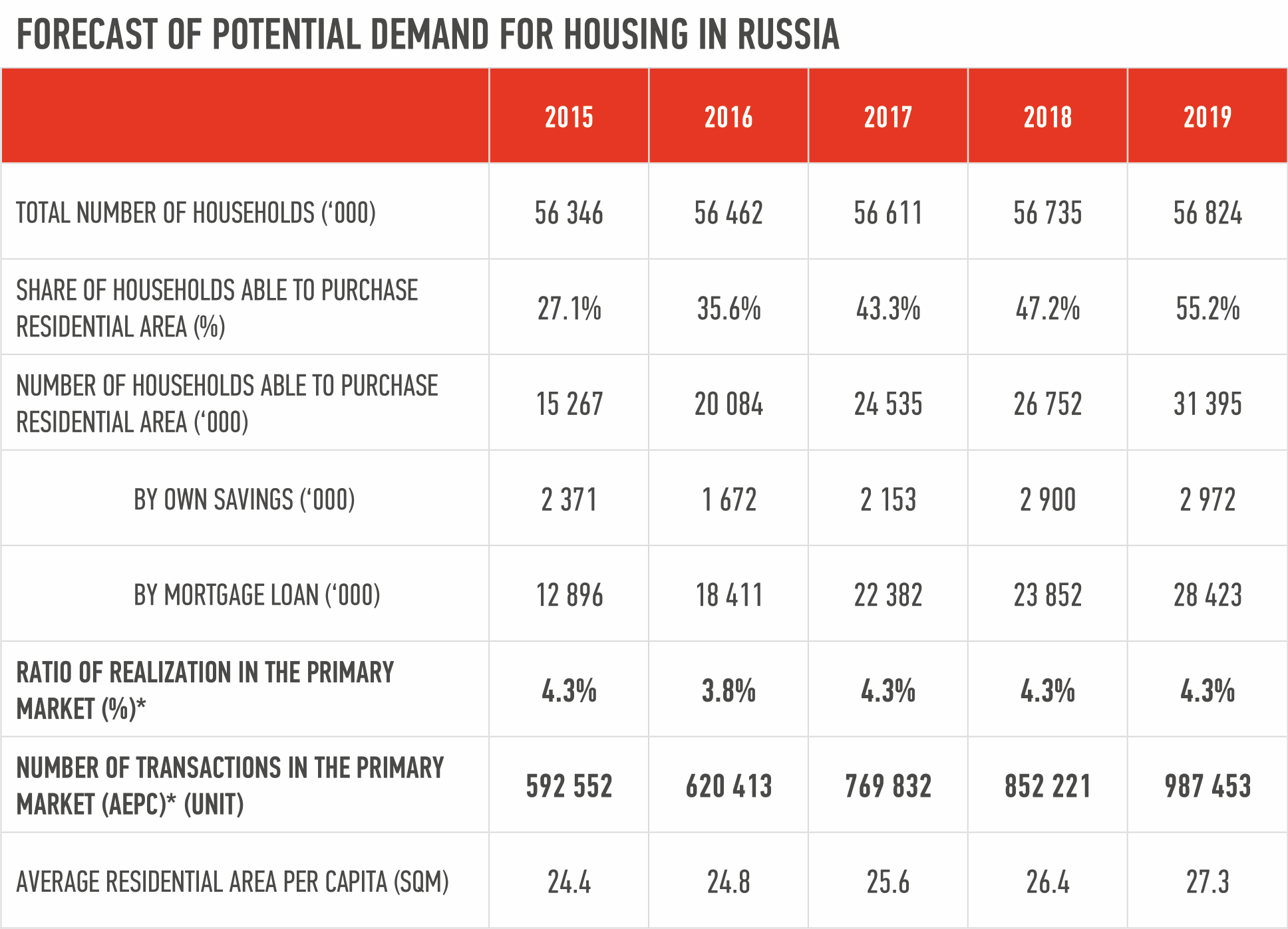