Are you a motivated social engineer in CEE? Do you want to change the country you live in? Or you are just interested, what could be the most successful strategy on the periphery of Europe? You are at the right place. Please, welcome the D-I-Y Guide to CEE!

In this post, we first define success in CEE. Second, using the Global Competitiveness Report, we analyze what aspects could help a country achieving that success. And third, we present you the ultimate D-I-Y Success Guide to CEE.

There are many possible ways to define success. In this post, we chose the century-old dream: reaching the GDP level of Austria. All four Visegrad countries have a long history with Austria and are taking this country as a role model. 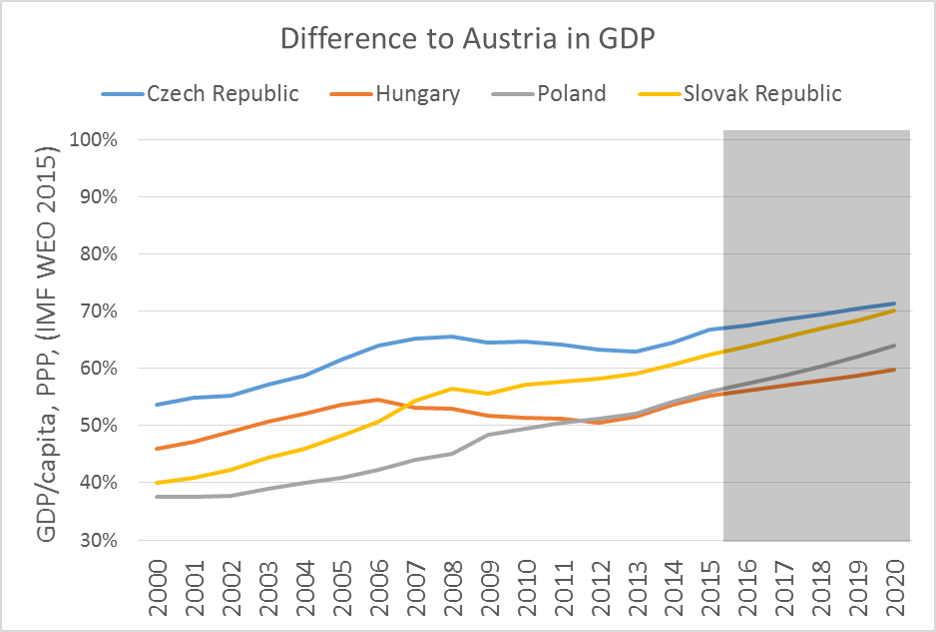 Taking a look at the graph, the first thing that we see is that we have a clear loser: Hungary. After a good start, the period between 2005 and 2012 was a nightmare: regional growth was healthy, but the country was losing both to Austria and to other V4 economies.

The Czech Republic started from the best position, and is still leading, but with a smaller lead. They also should not be happy about their last 10 years, since they do not seem to be able to break the 67%-to-Austria ceiling.

The two winners seem to be Poland and Slovakia, with an almost steady growth throughout the period.

How to become competitive

So how can we explain these differences? The topic of economic convergence is very broad and well-researched. Here, we will catch only some of the aspects of the theme.

There are two broad categories of effects we have to consider when we talk about the success of countries: external and internal factors. External factors are those effects that a country cannot change, they just “go with the flow”: world economic growth, political conflicts, global credit environment, raw material prices, technological progress, etc. This is a set of very wide effects, and we do not have the capacity in this blogpost to present them.

Instead, we will concentrate on internal factors: those elements of an economy, on which the different actors (government, central bank, etc. even ordinary people) in the country can have an effect. The World Economic Forum calls these factors the 12 pillars of competitiveness, and has been publishing its Global Competitiveness Report (GCR) since 2006.

Austria is of course a lot more competitive than V4 countries. Let’s see how V4 performed as opposed to Austria in the last 10 years. 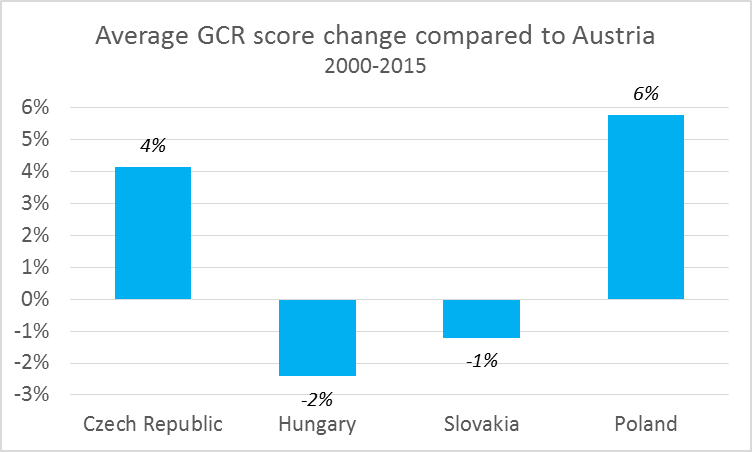 The average GCR score of Austria has not changed much between 2000 and 2015 (5.24 vs 5.18, the 23rd most competitive country in 2015). However, the average GCR score of V4 countries have changed: Poland and the Czech Republic became more competitive compared to Austria (reached 4.6 (41th) and 4.8 points (31th), respectively). They are still a lot less competitive as Austria is, but a 4-6% increase compared to Austria (“convergence in competitiveness”) is a big achievement. Slovakia and Hungary cannot be happy about their last 10 years, as they even diverged away from Austria (Slovakia 67th, Hungary 63rd).

So the pattern for V4 is diverse. The Czechs and Poles seem to be winners, whereas Hungarians and Slovaks losers.

If we take a look at the 12 pillars separately, there are big differences among countries. Poland converged the most in 9 pillars, and the Czechs won the 3 rest. In none of the pillars did Hungary or Slovakia win. 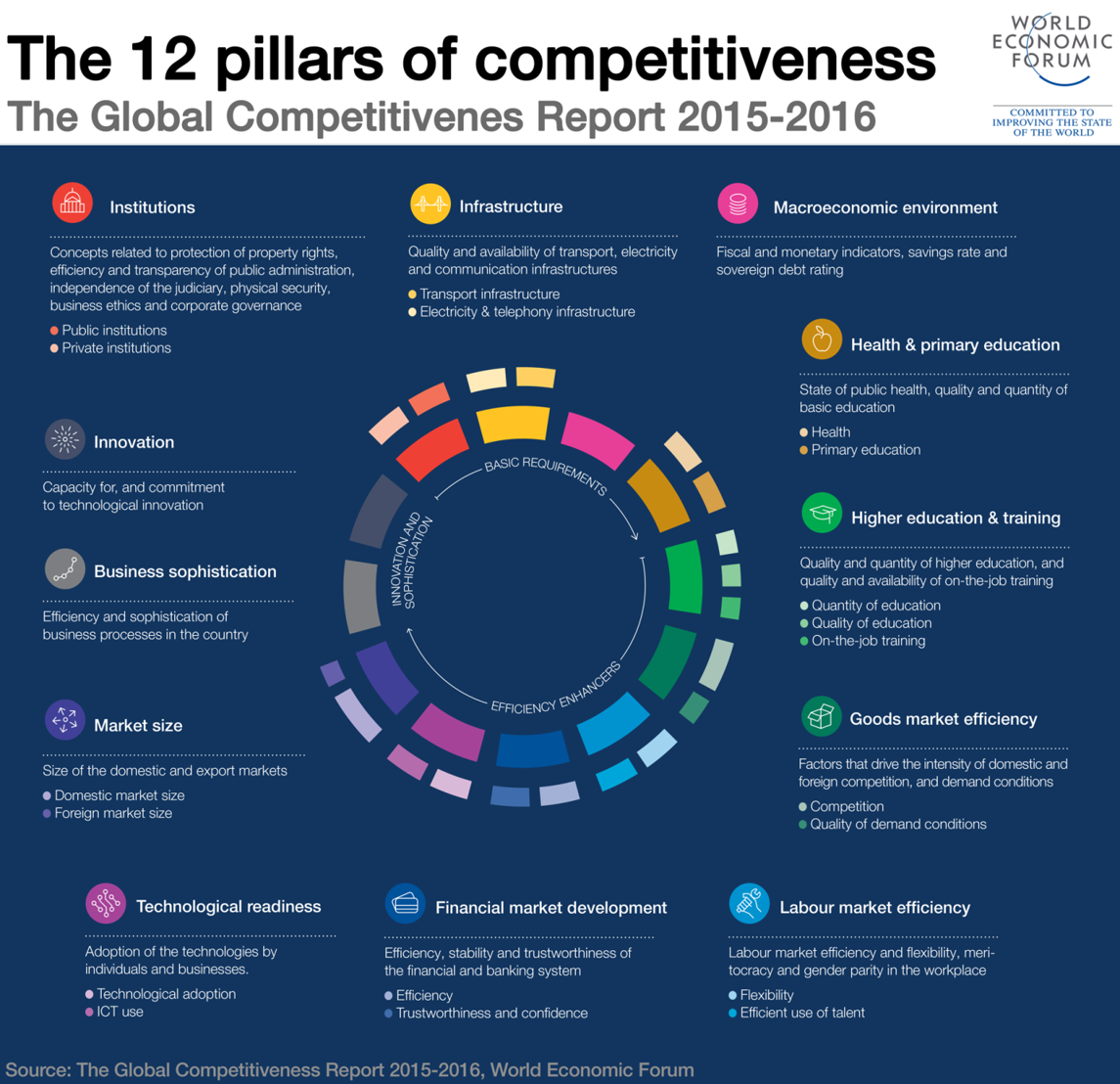 The biggest difference occurred in three pillars: technological readiness, financial market development and institutions. Technological readiness is essential in an emerging country. This pillar shows the “agility with which an economy adopts existing technologies to enhance the productivity of its industries”. So it shows if a country is heading towards accepting more and more state-of-the-art technology and thus achieving high-skilled labor employment and convergence. Poland and the Czech Republic have been advancing heavily in this. 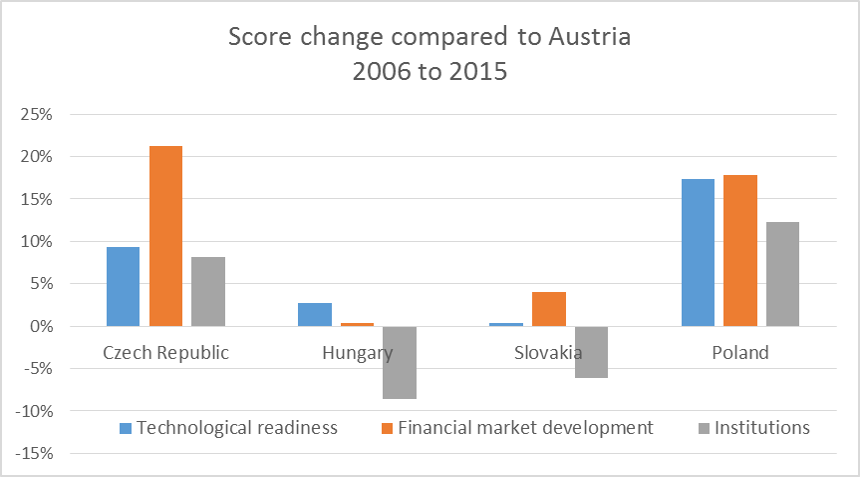 Financial market development shows how well the financial sector functions. This “channels resources to entrepreneurial or investment projects with the highest expected rates of return rather than to the politically connected. The banking sector needs to be trustworthy and transparent, and financial markets need appropriate regulation to protect investors and other actors in the economy at large.” Poland and the Czech Republic was able create a more and more stable and well-functioning financial system. This decreases the risk for investors and thus incentivizes those activities that have a longer time horizon, which are also usually more high-skilled labor intensive.

Institutions are the backbone of any country’s long-term success, according to both the World Economic Forum and the currently leading development economics school of institutional economics. The strength of the institutions determine which individual choices are optimal in a country. Strong institutions, strong property rights, trust in the government make it a winning strategy to start a competitive company which builds on high-skilled human capital. In a country with weak institutions, however, a better strategy is to focus on short-run benefits and engage rent-seeking behavior. Poland and the Czech Republic managed to continue on their path towards strong institutions. Hungary and Slovakia; however, have demolished institutions. Increasingly loud corruption scandals and the inefficient state’s take-over of whole industries weighted on the countries’ competitiveness.

Why Slovakia and not Hungary?

The previous three pillars do not seem to show why Slovakia performs better than Hungary. There are three pillars in which there is a huge difference between Hungary and Slovakia. Not coincidentally, these are the pillars in which Hungary performed the worst overall as well: Health and primary education, higher education and training and business sophistication. 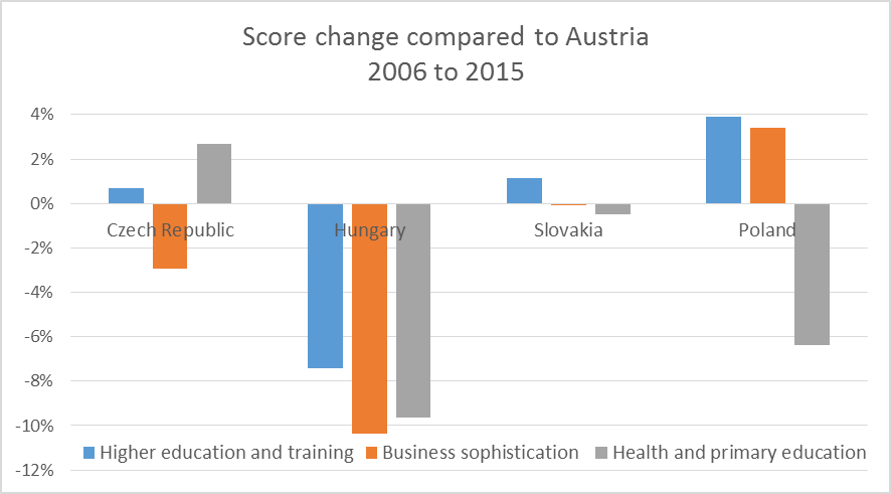 Health and primary education and higher education and training are about the same thing in a way: an effective, adaptive workforce that makes it sure that there will be no labor shortage for a company’s operations neither in the short nor the long run.

Health and primary education “increases the efficiency of each individual worker. Moreover, often workers who have received little formal education can carry out only simple manual tasks and find it much more difficult to adapt to more advanced production processes and techniques, and therefore they contribute less to devising or executing innovations. In other words, lack of basic education can become a constraint on business development, with firms finding it difficult to move up the value chain by producing more sophisticated or value-intensive products.”

Higher education and training is “crucial for economies that want to move up the value chain beyond simple production processes and products. In particular, today’s globalizing economy requires countries to nurture pools of well-educated workers who are able to perform complex tasks and adapt rapidly to their changing environment and the evolving needs of the production system.”

Business sophistication is by definition the most important aspect a country has to put emphasis on if it wants to converge to the most productive countries. “Business sophistication concerns two elements that are intricately linked: the quality of a country’s overall business networks and the quality of individual firms’ operations and strategies. These factors are especially important for countries at an advanced stage of development when, to a large extent, the more basic sources of productivity improvements have been exhausted.”

Based on this, we can conclude that Hungary impeded its growth by not putting enough of efforts on developing an adaptive and high-value added workforce. Moreover, the operation of Hungarian firms is still inefficient and the country’s business networks are not interconnected enough.

Based on the GCR, Poland seems to be a clear picture: performed the best among all V4 countries and was fully rewarded with great economic success. Poland might look like the “dream country” in Eastern Europe. However, there are signs that not everybody thinks like that. Last year, the far-right party (“Law and Justice”) won both the Parliamentary and Presidential elections. This less West friendly party may lead Poland away from its current path.

The other clear picture seems to be Hungary: performed the worst in the V4 and has ended up basically stagnating in the last 10 years. Instead of pushing towards a more a productive labor force, they opted to be the country of shared service centers and car-manufacturing plants. This is a necessary step towards convergence, and can lead to successes (as we can see in the last couple of years); however, nurturing an adaptive labor force and streamlining business operations is necessary for long-run convergence. Therefore, the current lack of progress in competitiveness does not show how the country could converge towards Austria on the longer run.

The Czech Republic is a little more complicated: they performed well in competitiveness; however, GDP growth has been lackluster in the last couple of years. There are two factors that might explain this: EU funds and the global macroeconomic environment. Since the Czech Republic is the wealthiest V4 country, they have received considerably less EU funds in the last 10 years. Moreover, the environment that favored growth in Eastern Europe (low energy and raw material prices, pick-up of manufacturing) benefitted mostly the less developed countries. Still, the case of the Czech Republic shows that it is hard to pass the glass ceiling, which slows convergences after a certain ceiling in GDP was reached.

Slovakia is an interesting case: performed worse than average in competitiveness, but has been growing steadily. To put it simple: Slovakia chose a similar growth path like Hungary, but without its mistakes. The state put emphasis on education and training of its workforce and the introduction of the Euro created a low-risk environment for foreign investors. Still, lack of convergence in competitiveness shows that Slovakia also has a lot to improve and its long-run convergence is still questionable.

The ultimate Do-It-Yourself Guide to CEE

So, you are the benevolent social engineer of an economy in CEE? Based on the previous findings, to achieve success in convergence towards Austria, you have to