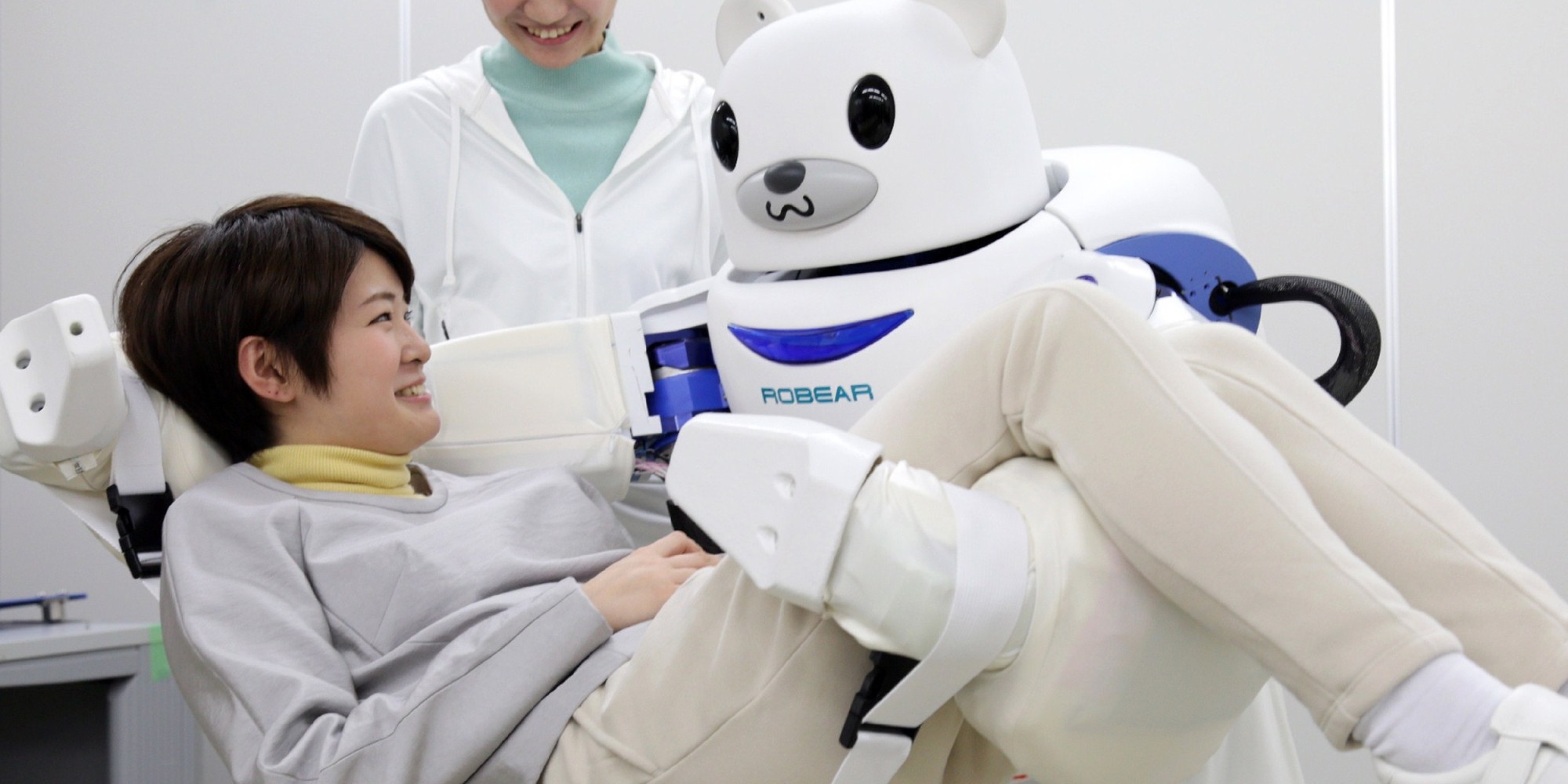 Robear is helping to revolutionize the manufacturing industry: do robears prefer China or Europe? (source: HuffingtonPost)

Adidas has announced that it will open its first all-robot factory in Germany, and many will follow in rich countries. Foxconn, the manufacturer of Apple products fired 60,000 employees and employed robots instead of them. It seems this is the beginning of the end.

The way we manufacture products is about to change dramatically in the next decade. There are two intertwined trends that have already started to revolutionize the industry: the digitisation of industry (or the “takeover of robots”) and that global economic growth is less and less energy and machinery-intensive (more and more value added comes from services). None of these are new; however, both of these trends are in front of a new era of growth. Developments in big data and machine learning are increasing the capabilities of robots and global value chains are becoming seamless. Economic growth is coming increasingly from services, as opposed to manufacturing. Moreover, growing concerns about climate change and the ongoing shift away from heavy machinery in state-of-the-art manufacturing are leading to the growing use of lighter materials instead of metals. 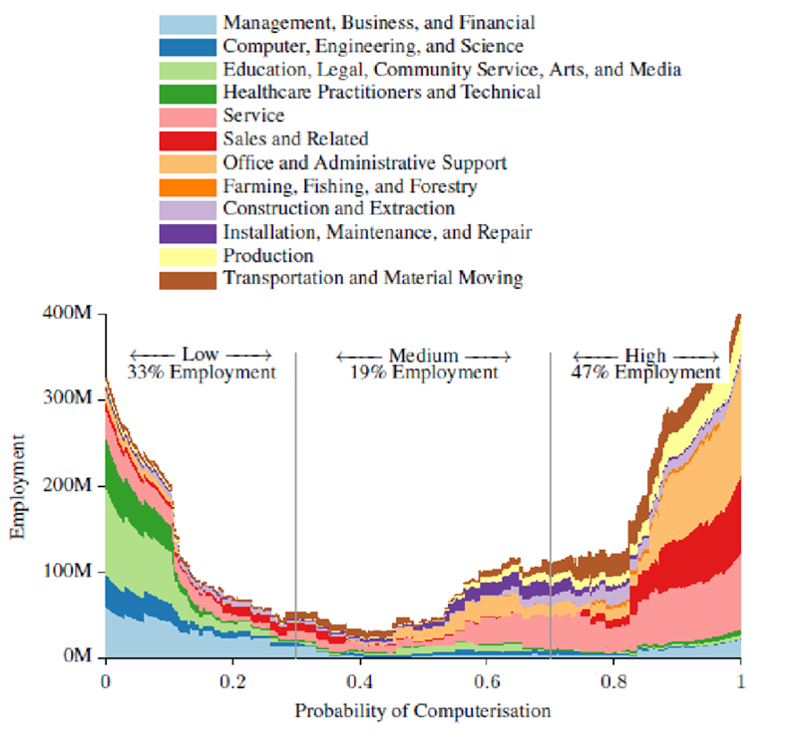 Both low skill and high skill jobs will be touched by robotization. The probability of robotization in manufacturing production is relatively high (labelled “production”). Source: Frey and Osborne

What does this mean for the future of manufacturing? It means that the currently prevailing model that builds on cheap labour (the “China model”) may be heavily questioned. Robots taking over work from people lead to a more patterns- and capital-intensive industry, which depends more heavily on innovation, cheap capital and higher value added labour. Moreover, instead of using iron, manufacturers will substitute more and more towards heavy duty plastic and other lighter products (like carbon fibre). Manufacturing with lighter materials as opposed to metals means that factories can become smaller and less polluting.

This structural shift in manufacturing is diminishing the traditional competitiveness of China. The miracle of China was built on cheap labour, easily accessible credit and neglect towards the environment in the country. All three of these factors are endangered. Today, the Chinese population has made air pollution a very important political concern, leading to the closure of several coal-fired power plants and partial bans on downtown car usage. Global markets have been fearing the burst of the Chinese housing bubble, showing signs that the current growth model of heavy borrowing has come to an end and investors are more vary on China. And third, robots are way cheaper than any Chinese worker ever was (see chart below). 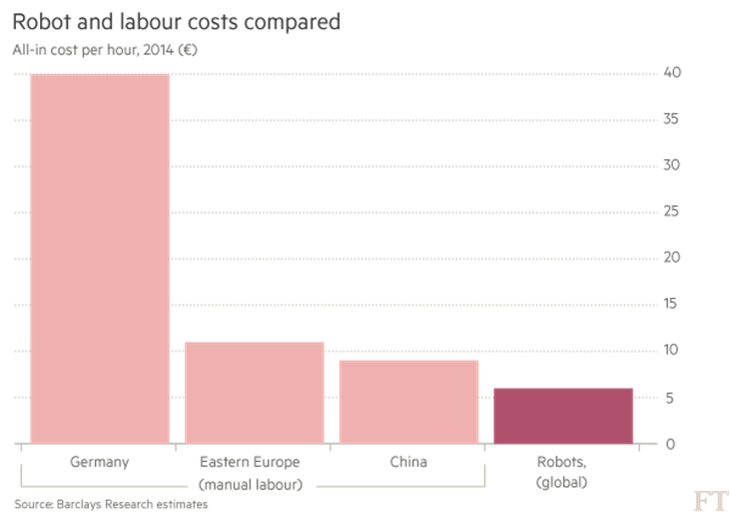 China understands this and heavily incentivizes the spread of advanced machinery and robots in manufacturing (the number of new research patterns has been growing the fastest in the world). They are already planning the world’s first “dark factory”: it is dark, because there would be no humans working there. Robots don’t need light, so the factory can function in darkness.

This means that Europe’s traditional competitive advantages are becoming more important – make no mistake, disadvantages will not disappear, they will just become smaller. Good credit conditions, stable regulation, investment in R-D and high-skilled labour can become important factors to reindustrialize Europe. But this “new manufacturing” will be different from the current model.

A true global competition has started between China and the traditional developed countries for new manufacturing.

The European Commission realized these trends and published its action plan to “reindustrialize Europe” in 2014. The plan aimed to increase the share of industry from 15% (2013) to 20% by 2020. The plan envisions the EU as the leader of innovation where new technologies flourish and this additional 5% share comes mainly from six strategic areas. These are: advanced manufacturing (for example robotics), key enabling technologies (like batteries or intelligent materials), clean vehicles and transport (like building up an alternative fuelling infrastructure), bio-based products, sustainable construction (energy efficiency in residential housing) and smart electricity grids.

After the Juncker administration took control, the re-industrialization action plan was put on the agenda of Commissioner Elżbieta Bieńkowska. However, it ceased to be a separate plan and was incorporated into one of the ten Juncker priorities: the Internal Market. According to a speech she delivered last year, these are her main goals:

So far the following action plans have been announced: European space program, Defence action plan, preserving the steel industry (protection against Asian dumping and EFSI+ESIF+Horizon2020+Coal and Steel fund funding), action plan for the circular economy (funding of over €650 million under Horizon 2020 and €5.5 billion under the structural funds), digitization of EU industry (invest €500 million in a pan-EU network of digital innovation hubs and overall mobilize over €50 billion of public and private investments). However, nothing concrete has materialised so far for energy intensive industries.

Based on the Commission’s last years’ interests, it seems that they are mostly concerned about boosting investment mainly in research and development, with an emphasis on SMEs and start-ups. Traditional manufacturing companies are mostly touched by the efforts aiming at digitizing the industry and the deepening of the EU integral market. 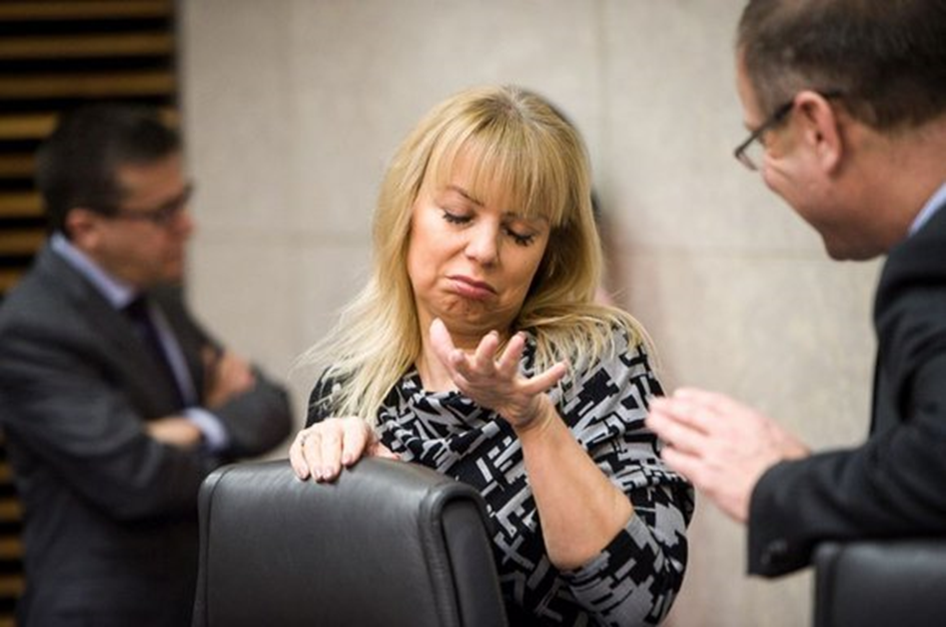 Ms Bieńkowska, how is the reindustrialization going? So-so… (Source: Salon24)

Among administrational and other smaller programmes, the EU connected two large funding projects to this aim:

This seems to be a lot of funds, but let’s take a look at how much was allocated for similar purposes in the 2007-2014 EU cycle. (At this point, it is impossible to match the two new programs with how the Commission categorizes available funds. Moreover, there are a lot of overlaps as well (for instance, the Horizon 2020 can be taken as „research and innovation” and „SME competitiveness” as well). 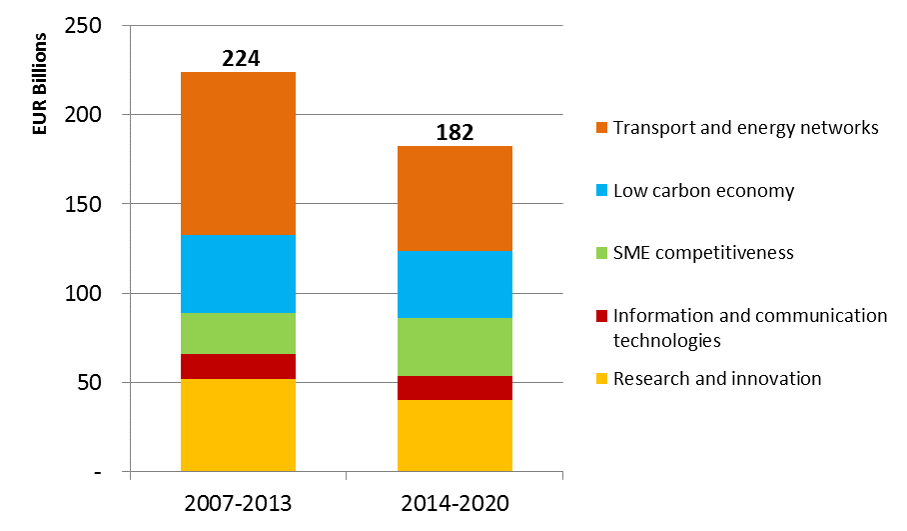 source: own calculations based on EC

The Horizon 2020 concentrates on research and innovation. The general idea behind the programme is that EU funds will result in new discoveries, which will be commercialized and then the manufacturing of these items will create jobs and enhance GDP.

A very similar program to Horizon 2020 was implemented between 2007 and 2015. The FP7 program had a similar amount of available budget as well. So far, the Horizon 2020 fared somewhat better since it managed to provide funding to a more diverse mix of players. This is likely due to the special funding instrument developed for SMEs. 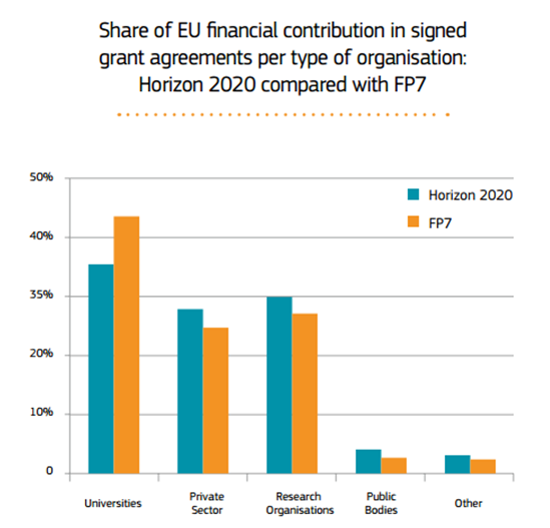 The following graph shows how the share of manufacturing in GDP has been declining in the EU ever since we have data. There are some countries, where the share has been stagnating, like Germany or Hungary.

The 15% share of EU GDP equalled EUR 2,1 trillion in 2013. The intended EUR 180 billion to be spent on re-industrialization equals EUR 26 billion per year, which is 1% of manufacturing GDP. This 1% alone will not change the course of European manufacturing.

What is needed for manufacturing to pick up? As discussed earlier, good credit conditions, low energy prices, skilled labour and good and stable regulation. If all of these conditions are favourable, then some EU and member state support can help to push the investment through. Europe is in a fierce competition with North America and the Far East in manufacturing. Europe might be gaining momentum as energy prices have dropped and EU economies are slowly emerging from the global crisis. However, the inflexible labour market, political troubles and unreliable regulation in some countries still weigh on manufacturing growth. And these are by far bigger problems than what the Commission’s re-industrialization program can counterbalance.

This can be good news for the construction market, since “new manufacturing” could mean a construction boom in certain areas of the industry.

Sitting on the horse the wrong way: Hungary

The Hungarian government has been having a love affair with manufacturing long before the 2014 European Commission plan. However, this is a different understanding of manufacturing. Whereas EU targets concentrate on high-value added, „smart” manufacturing, Hungarian dreams are about assembly plants spreading across the country employing low-skilled workers.

The plan was enacted by the Hungarian Parliament in early February 2016. The aim is to increase the share of manufacturing from the current 23.5% to 30% by 2020. This means a yearly 7% industry output growth. After this year’s catastrophic backdrop in manufacturing growth (), this seems to be a daydream.

The Irinyi plan has not yet been implemented and there has not been any specific sectoral plan announced. However, what the Hungarian government communicated so far makes it hard to take the plan seriously: its goals are out-of-date and EU funds alone will not start an industry renaissance.

What is needed for reindustrialization? Investment! The Irinyi plan is only about public investment. However, in the last 5 years, only around 22% of investments were public (which is quite high already). Moreover, private investments are on a constant decline since 2010. Public investments (mostly EU funds) were only able to keep overall investment levels flat.

According to Portfolio.hu, there are around HUF 500 billion EU funds (GINOP) to be spent on economic development in Hungary in the next three years. This is a conservative estimate, as they took into consideration only those programs that have already been published. The Ministry was talking about HUF 7200 billion EU funds to be spent on the Irinyi plan. If we assume an optimistic 75% rate of usage, this gives 5400 billion, which gives 770 billion yearly public investments for 7 years (until 2020). This is around 14% of 2015 Hungarian total investments. This is a sizeable amount; however, in 2015 public investments were HUF 1800 billion, more than twice as this much.

For a real industrial renaissance, private investments should catch up as well. What is needed for private investments to pick up? As mentioned earlier, good credit conditions, low energy prices, cheap skilled labour and good and stable regulation. If all of these conditions are favourable, then some EU funds and governmental support can help to push the investment through in Hungary.

Even if the level of overall investment is unlikely to be hugely affected, these funds can distort the market and change the mix of new investments in Hungary. The announced seven special sectors cover a wide spectrum of industry; therefore, to see how the mix might be affected, we would have to see the final programs available to investors.

From the point of view of the construction market, the Irinyi plan can have an important effect in changing the mix of investments in the country. However, based on what we know so far about the plan, it is unlikely that this will push Hungarian manufacturing

Global processes together with the EU-wide strategies; however, can be important drivers towards increased construction activity in „new manufacturing”.