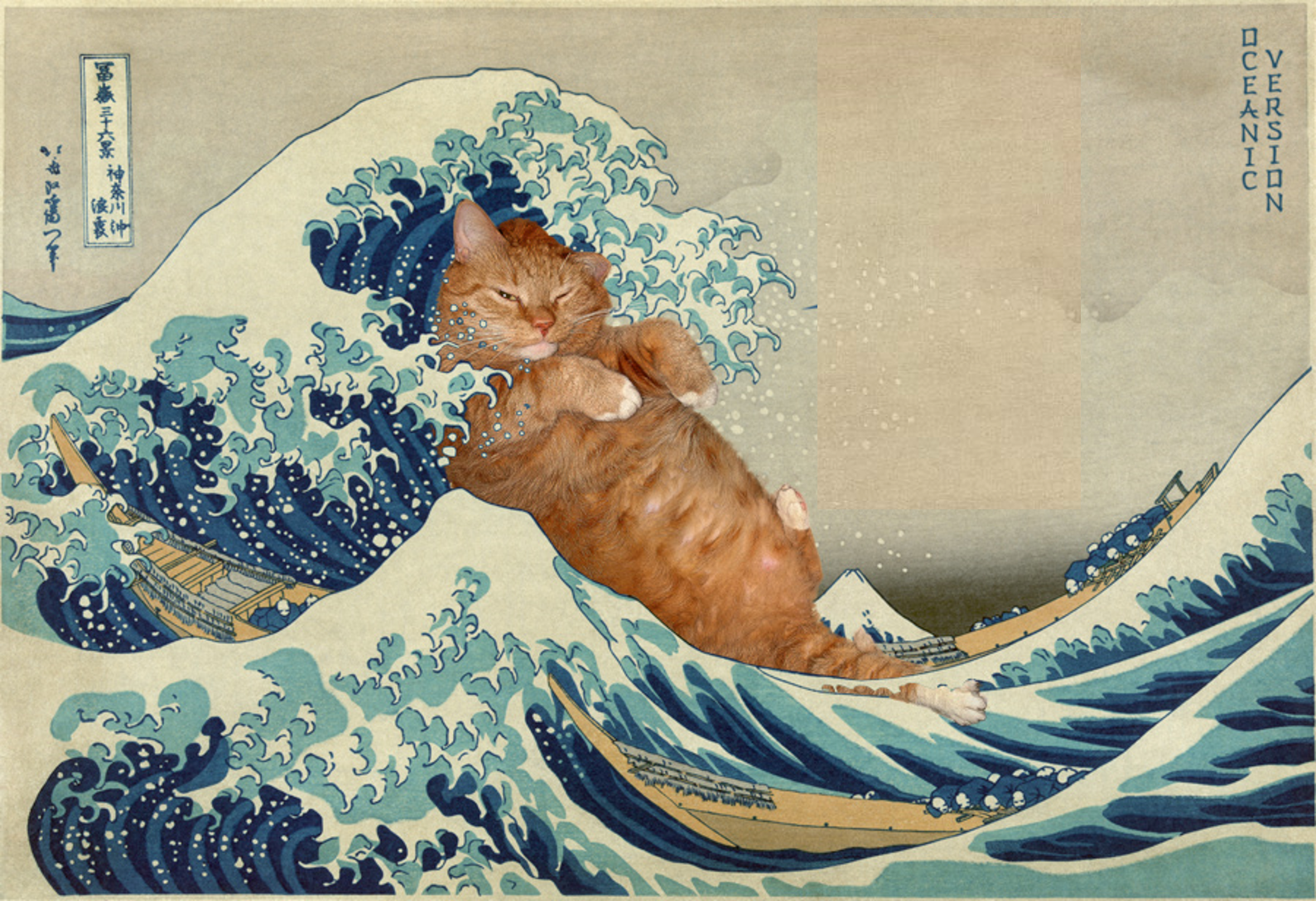 The most energy efficient animal and the wave. Source: FatCatArt

This week’s post is concerned with energy efficiency investments in housing. We wanted to point out the importance of three factors: stable economic growth, further decrease of costs in renewables, and sufficient amount of fundings from the EU. All three factors seem to be fulfilled for the next couple of years, and we think a new wave of energy efficiency investments is likely in the future.

Stable economic growth
The state of economic performance is essential for housing investments as such investments are paid back only after a couple of years. In a recession, however, actors cut back their investments and adopt a ‘wait-and-see’ approach.
Last month’s newest IMF World Economic Outlook forecasted a slow, but steady recovery in Europe (see chart below). The convergence of new member states will likely keep up, since they forecasted a persisting 1% higher growth rate in the next 5 years. Europe’s powerhouse, Germany, is forecasted to reach a sizable 3.4% yearly growth by 2018. No matter how overoptimistic the IMF usually is, based on these results we can conclude that there seems to be no obstacle for energy efficiency investments from the side of economy. 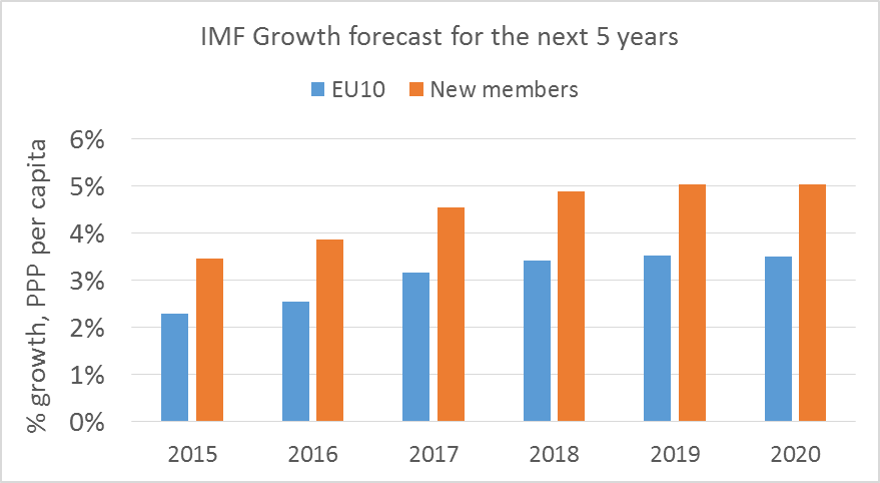 Cost of efficiency investments: solar revolution
After years of state supported pushes, the real solar revolution is here: the cost of solar photovoltaic modules have been decreasing sharply in the last years (see chart) and experts predict that soon deploying utility-scale solar PVs will be cheaper than any other mean of electricity generation. Without any state support. The cost of rooftop solar has also been decreasing rapidly. If you are interested more on this topic, we recommend reading Ramez Naam on solar and battery costs and the International Energy Agency’s publications. 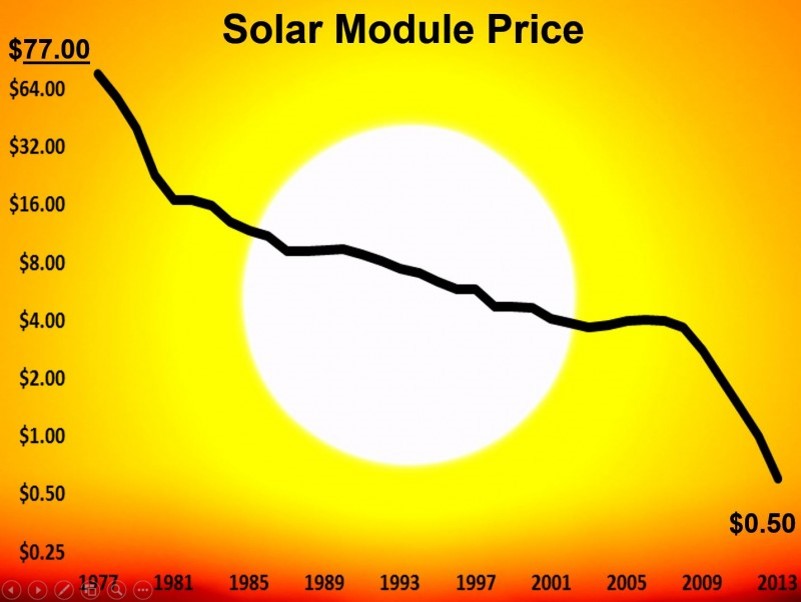 This solar revolution decreases the costs of renewable-linked investments and increases the incentive to install solar panels at a time of building.

New EU budget: three times more funds for energy efficiency
The total EU budget for the 2014-2020 period is nominally almost the same as it was for the previous one: EUR 336 billion. There have been a lot of reshuffling of programs and it is hard to see today how funding for the different objectives is going to change.

The “low carbon economy” policy has EUR 38 billion to be invested between 2014 and 2020, which is twice the amount that was spent during 2007-2013. This policy focuses on investments in energy efficiency in buildings, renewable energy, smart grids and sustainable urban transport. Most of this amount, EUR 23 billion is to be spent on its subprogram “energy efficiency and renewable energy use in buildings” (EC).

There is no country breakdown of the energy efficiency in “energy efficiency in buildings” program; however, it is available for its “parent” program, the low carbon economy policy. 19% of this policy will be financed through the Cohesion Fund and 81% through ERDF.

The chart below shows how much countries will be able to spend in the next seven years compared to their current GDP. In addition, we also added how much was allocated in the 2007-2013 period.

There are three times more funds available for energy efficiency in the 2014-2020 period than it was previously.

The biggest net beneficiary is Poland (EUR 9 billion) and then Romania and Spain (both EUR 3.4 billion). If we compare available funding to the GDP, then Lithuania is the winner: in seven years, it has the chance to invest 2% of its annual GDP into a low carbon future. Not surprisingly, most of the funds are headed to the periphery: the first non-Eastern European country is Portugal on the 11th place.

Today, it is not possible to determine how much of this funding will go on which programs, since the publication of final decisions is still in progress. The broad objectives have not changed compared to the previous period, they still incentivize investment into already built, low energy efficient buildings and there are programs for both private and public entities.

The coming wave of energy efficiency investments
Summing up, all three important factors point towards a new wave of spending in energy efficiency. The economic outlook is bright and stable plus there has been a massive decrease in the cost of rooftop solar panels. In addition, the European Union made three times more funds available for the next seven years, mostly boosting investments in Eastern European member states.

Every week, we reward our readers with a video for keeping up until the end of the post. This week’s video is about the trade-offs of building green: