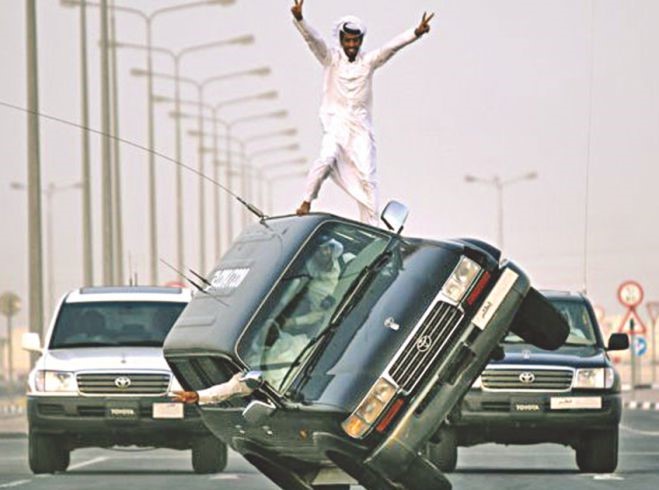 After assessing the impact of immigration on the European Union, this week’s post concentrates on another current issue: the oil price decline and its consequences on the construction sector.

This global income redistribution from oil exporters to importers is an opportunity for the construction market: they can ride the falling Saudi bull as cheaper fuel prices, lower costs and stimulated EU economies may generate more demand.

The International Energy Agency is forecasting a lasting low price environment; therefore both short and medium term effects are worth studying. The direct effect of lower fuel prices is a boost both for companies in the construction sector and for most European economies. However, missing petrodollars in the world economy and Russia’s dependence on oil revenues hold an important risk for the future.

Such issues will be discussed at the 80th EUROCONSTRUCT Conference.

How long is it going to last?

The decline of global crude prices started in summer 2014 and sent Brent prices from the 100+/barrel range down to 50, the two principal causes being – as mostly in economics – supply and demand. Due to the American shale oil revolution, Non-OPEC output reached all-time high and there was no supply distribution to counterbalance this oversupply on the market. On the demand side there is China: Chinese oil demand growth went up by half in 2014 as opposed to the 10 years’ average. Booming supply and lackluster demand growth caused the price drop that was strengthened by the OPEC’s decision not to cut back its production.

An important element is that oil was the last commodity to experience the decline, most of the other commodities (especially coal and copper) have already felt China’s slowdown: the world’s biggest commodity importer.

The International Energy Agency expects prices to move upwards from current levels; however, the increase will only be gradual despite stimulated demand growth. This is mostly due to the resilience of American shale oil producers despite low prices and also to increasing OPEC production mainly from Saudi Arabia and Iraq. An increase in production from Iran after sanctions are lifted also pushes prices downwards. 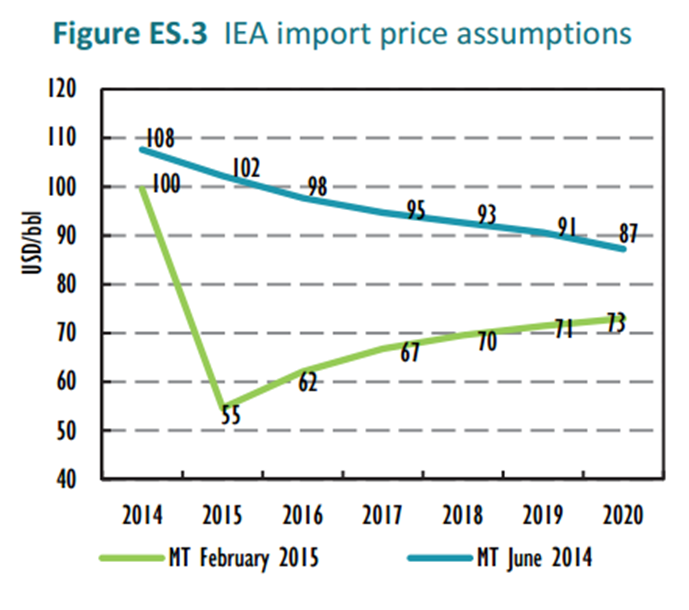 Most of the EU member states are net oil importers; therefore, a price drop lowers their oil import bill. The biggest winners are the Baltic States, CEE countries and Germany, as here the current account surplus due to the price decline is above 2% of GDP. The same figure for oil producing countries like the UK or Romania is lower, but still positive as they are net importers: between 0% and 1%. The biggest losers are Norway (-10% of GDP), Russia (-10%) and Azerbaijan (-22%) as most of their export are driven by oil.

These figures should be perceived as savings, not outright change of GDP: some are driven away by consumers, some are gone to the state budget and only some eventually boost the economies’ value added. 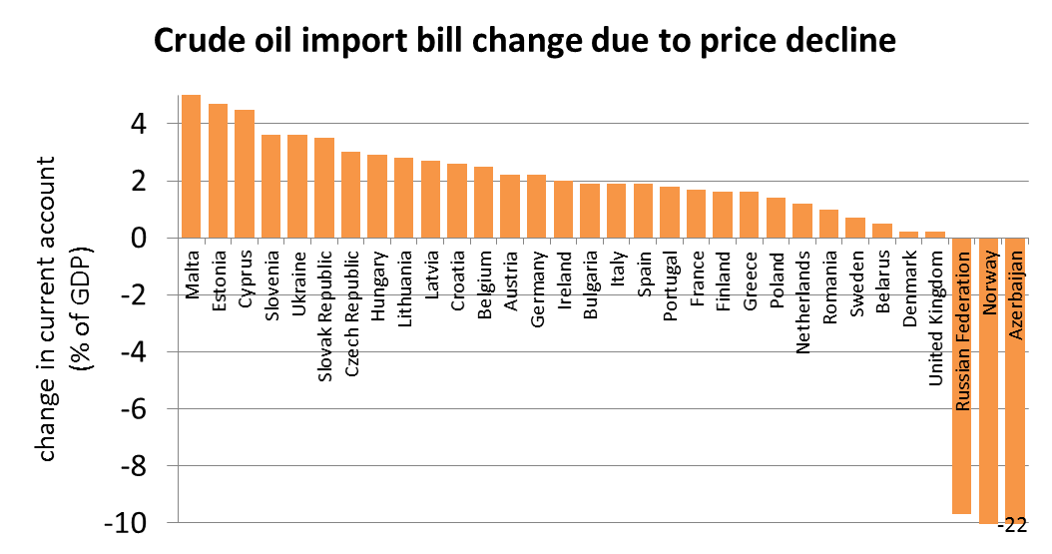 A lower oil price means lower diesel price: an important input for the construction market. This can lead to increased profitability for firms and/or lower prices, which would mean increased demand for construction. The next figure shows that actors on the construction market do not meet 50% lower input prices: even though global crude prices halved, European diesel prices decreased only by 20%. This is mostly due to high excise taxes on fossil fuels in Europe. 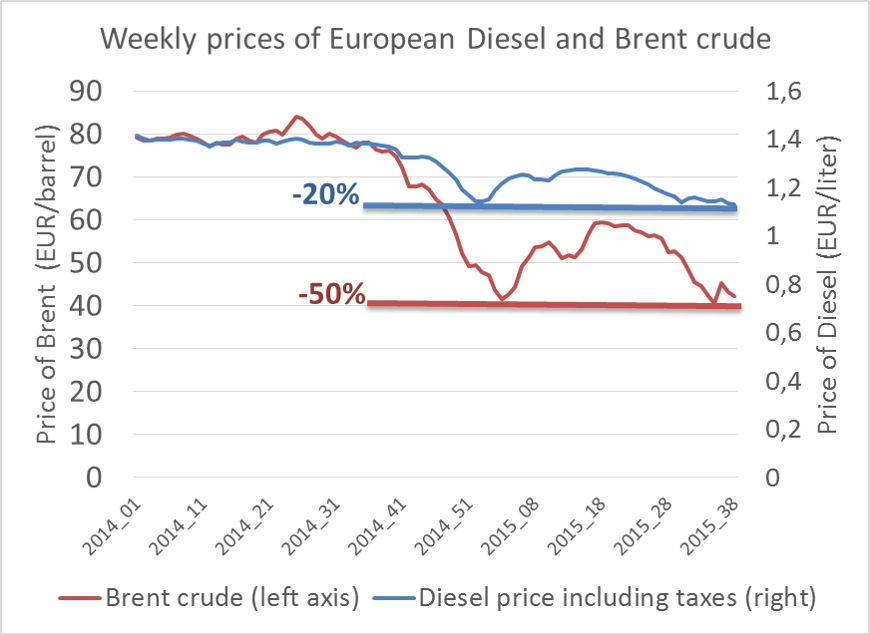 The downside: political risk in CIS and missing petrodollars

Russia is the world’s biggest natural gas producer, still, it is more reliant on revenues from crude oil and petroleum products (see figure). As more than 50% of its export is coming from the oil industry, sustained low prices are putting the state’s budget under severe strain. According to Deutsche Bank, crude oil should be above $105/barrel for the Russian state budget to break even. Fiscal adjustment is taking the form of higher inflation and depreciating Ruble, but this reduces real incomes. For some time sovereign wealth funds („rainy day funds”) can help out the budget, but in the current low price environment, sooner or later the ruling elite will have to make hard choices: cut budget deficit by lowering welfare expenditures and thus, risking voters support or leading the country to another default.

Most of the former Soviet Union economies are strongly dependent on Russian economy. A slowdown would be a major hit for the economies of the Baltic States, Belarus, Armenia, Moldova and Ukraine as well. There is an excellent piece on spillover effects on the IMFblog.

Missing petrodollars constitute the biggest risk for the global economy. The restructuring of income from oil exporters to importers is rather positive for the world economy in the long term; however, the gradual liquidation of the world’s biggest investments funds can have dire effects on investments.

The three biggest oil-dependent sovereign wealth funds have already started the depletion since states needed the funds to balance budgets. According to the newest IMF report (see figure below) on the Middle East, most of the key oil producer countries have ample fiscal buffer to sustain a 5-year-long low oil price environment. But this will mean the gradual depletion of funds having been one of the most important investors in the European construction market as well. 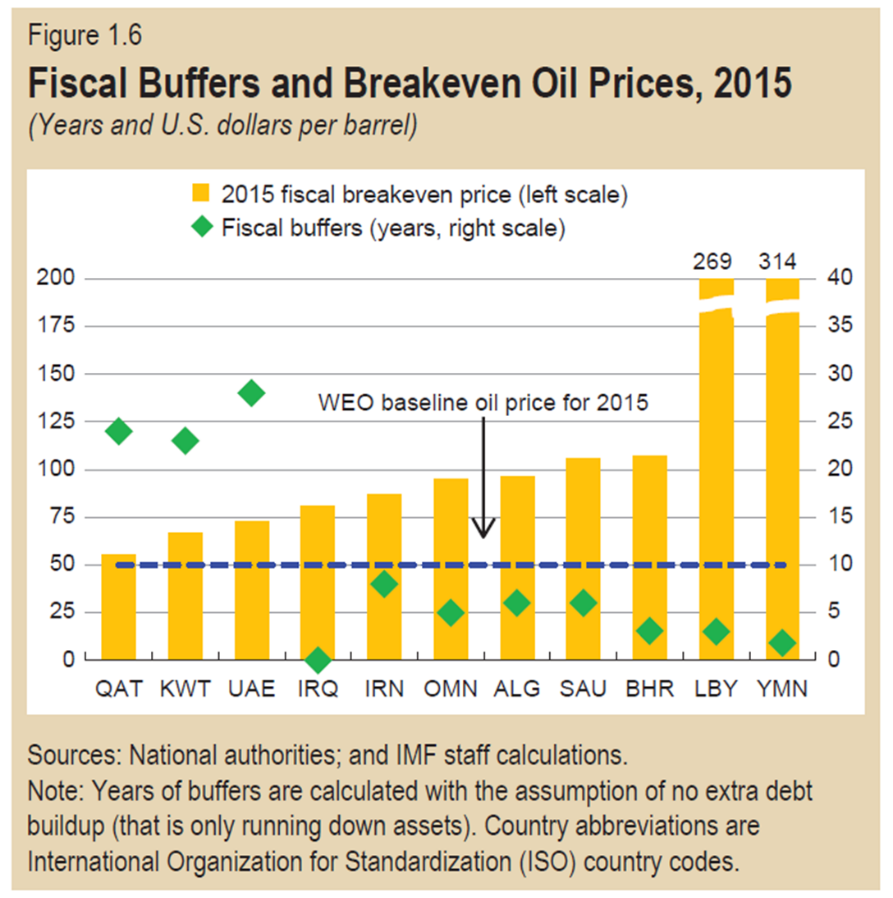 Summing up, we can say that the oil price drop is an important boost for the construction sector; however, there are some significant downside risks as well. The direct effect of lower fuel prices is a boost both for companies in the construction sector and for most European economies. However, missing petrodollars in the world economy and Russia’s dependence on oil revenues hold an important risk for the future.

Every week, we reward our readers with a video for keeping up until the end of the post. This week’s performance shows both the importance of oil in the world economy and Russia’s attraction to it: Neft (oil)

(notice the hard choice between oil and natural gas from 2:21)