EECFA (Eastern European Construction Forecasting Association), conducting research on the construction markets of 8 Eastern-European countries, released its 2018 Winter Construction Forecast Reports on 5 December 2018. Key findings are summarized below. Full reports can be purchased, and a sample report can be viewed at www.eecfa.com.

In many previous forecast rounds we have argued for a soft-landing scenario in Turkey. However, the dramatic fashion of the currency depreciation in summer 2018 unearthed many structural problems of the construction industry and made us revise our forecast to an even more pessimistic one. Unlike the stop-and-go like reactions to previous crises, we tend to believe in a stop-and-stay scenario this time. In Russia, we are less pessimistic thanks to a recently announced governmental program expected to affect the market positively.

Optimism still prevails in the Eastern and Western Balkan countries of EECFA. For the region as a whole the new forecast sees just a little downward revision. However, on country level, the stories are different. Less optimism in Croatia and more optimism in Serbia and Slovenia compared to the previous forecast round. In Romania, the largest construction market of this region, the outlook of the building construction submarket has been adjusted downward.

Bulgaria. Construction output in Bulgaria is speeding up with an expected growth of 7.4% in 2018. Residential construction continues to expand on the back of increases in economic activity and real disposable income, and historically low interest rates on housing loans. Additionally, the non-residential segment is also predicted to grow driven mainly by office and industrial constructions. Civil engineering construction has continued its recovery path in 2018, while the planned start of long-awaited infrastructure projects funded by the EU in 2019 and 2020 will add more fuel to the segment. Therefore, total construction output is forecasted to increase steadily by 7% in 2019 and 6.4% in 2020.

Croatia. Croatia’s construction sector is maturing, as catch up growth slows in several subsectors. But the situation is complicated, since catch up growth continues strong in other subsectors and overall output levels remain high in a number of subsectors in which growth has declined. Making matters still more complex, Croatian construction is vulnerable to shifts in tourism demand, Russian sanctions, continued large-scale emigration and poor government performance in drawing down EU funds. All in all, careful analysis of trends in individual subsectors is required to obtain even the most basic understanding of the Croatian construction sector.

Russia. The overall slowdown in the Russian economic growth recorded in H2 2018, the completion of many major infrastructure projects (Crimean Bridge, World Cup facilities, etc.) and the resulting decline in growth rates in civil engineering have made us forecast a minimal growth for the total construction market for 2018. Nonetheless, residential construction in 2018-2020 should receive a record amount of state funding under a new national project, and thus it could become the flagship of the whole construction sector. Non-residential construction in these years will likely demonstrate recovery trends due to the public investments (education and health segments), as well as agriculture. In civil engineering, on the contrary, decline is expected in construction volumes due to the gradual completion of big-league gas pipeline projects and a number of transport and energy projects.

Romania. Construction activity in Romania is estimated to have grown by 5.9% in 2018, lower than our previous estimates (+7.1% in Summer 2018). Residential construction is a major contributor to present and future growth, but there are signs of deceleration due to the threats of oversupply, increased labour costs and more expensive mortgages. Non-residential construction should also continue to expand in the forecast horizon; but growth in the longer run will be capped by the limited available workforce and higher labour costs. After a two-digit decline in 2016 and 2017, civil engineering is predicted to pick up speed by the end of the forecast period. We can conclude that prospects for the Romanian construction market by 2020 continue to be positive, even if slightly less optimistic than before.

Serbia. Construction outputs in Serbia have been expanding in a very strong cycle supported by increased investments in both public and private spheres. A particularly booming growth has been recorded in residential construction, but non-residential segments are also riding the wave, with retail being the star performer. The number of issued permits is breaking all-time records across all subsectors, promising a strong recovery with the often-double-digit growth throughout this forecast horizon. Civil-engineering also delivers acceleration, with large-scale projects in road, railway and energy segments expected to fuel a sustained growth even beyond 2020.

Slovenia. The Slovenian construction industry grew rapidly in 2017 and will likely continue its strong rebound from the stagnation it experienced between 2011 and 2016. In 2019, total construction output should reach EUR 3bln for the first time since 2010. The strong economic growth is fuelling both private and public investments into construction that are increasing in most segments. With the continuation of growth forecasted in 2019 and 2020, construction should continue to expand and there is even a strong upside potential in case some the long-delayed large civil engineering projects commence in this period.

Turkey. The Turkish currency crisis in 2018 has impacted inflation, consumer and producer prices, and construction costs. Construction permits underwent a massive slump in the first nine months of 2018. Occupancy permits were left intact, though, probably because of the significant backlog of construction. Mortgage interest rates underwent an around two-and-a-half-fold rise, but housing sales have not much altered, though the number of borrowers plummeted. Declining real home prices might have caused the stable home sales given the temporarily lowered VAT rate for some home types in Turkey from 18% to 8%. Civil engineering projects will be affected by the presidential decree that halts the launch of new public projects. The current high interest rates will make financing more expensive. The government’s priority is to achieve price stability which is a prerequisite to get back to a growth path.

Ukraine. In recent years Ukraine’s construction industry has received a very big impetus to development. It continues to grow, but trends in various areas of construction are significantly different. In the residential subsector the market is saturated, and supply highly exceeds demand. Many residential complexes are under construction, but the profitability of housing construction decreases due to higher competition and cost, and demand remains limited due to the low purchasing power of the population. And low demand and lack of mortgages do not promise good prospects for this market segment. The stabilization of the country’s economic situation, reflected in positive trends in the real estate market as a whole, has not yet had a considerable effect commercial real estate segment though, and there are no major investments here. Civil engineering construction has the highest growth rates, primarily thanks to the increase in budget financing for the development of transport and energy infrastructure. 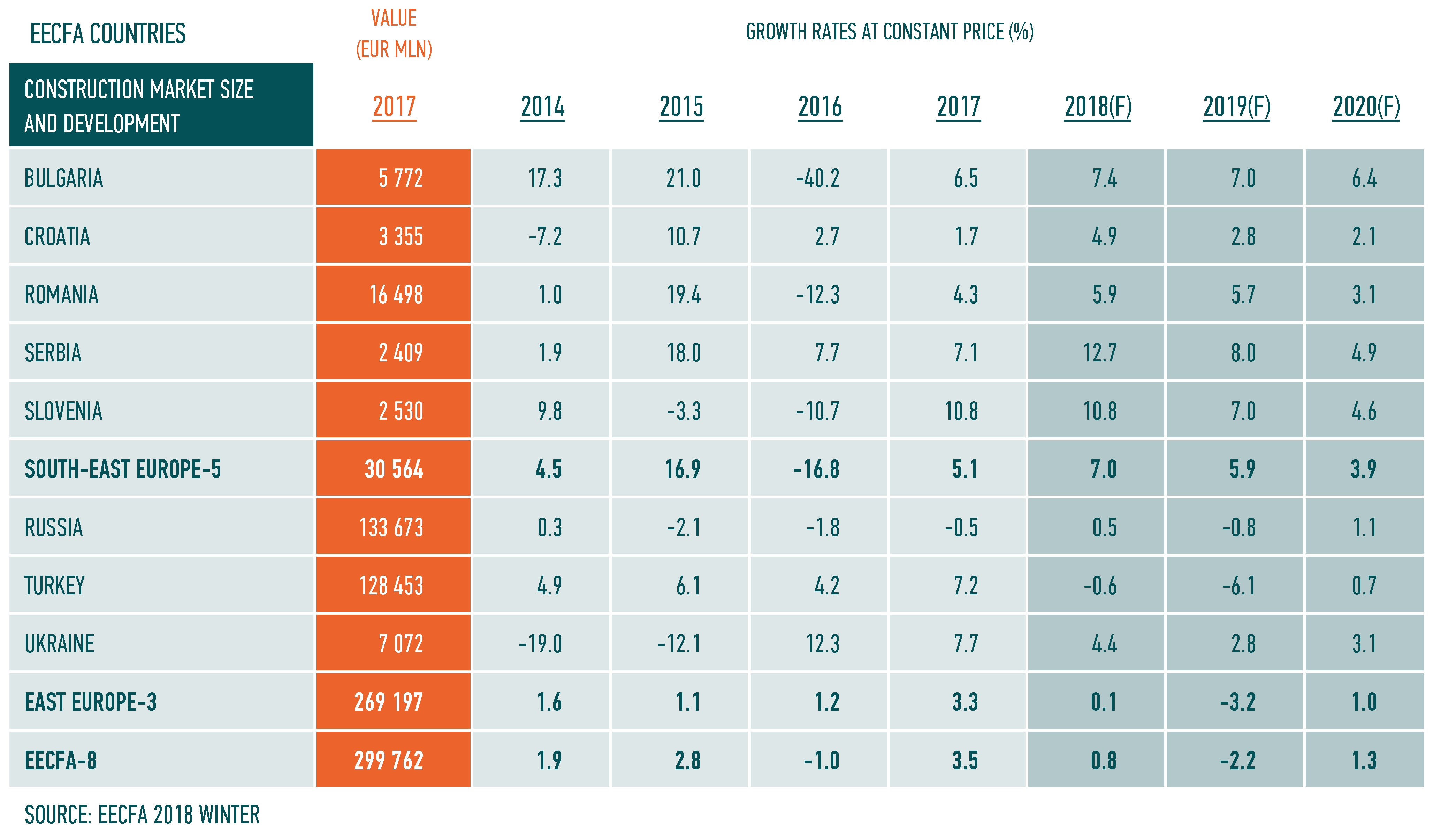