EECFA (Eastern European Construction Forecasting Association) – the forecasting association conducting research on the construction markets of 8 Eastern-European countries – published its 2017 Winter Construction Forecast Reports on 4 December. A concise summary on the main findings is outlined in this article. Please consider that foreseen development stories are rather different for the 3 submarkets (residential, non-residential, civil engineering) of construction in the countries we cover. In Russia, for example, civil engineering is expected to drive the total market back to expansion. Unless you need only an impression about the total market, we kindly suggest consulting with our reports.

Construction outlook up to 2019 in South East Europe: the countries EECFA dubs ‘South East Europe-5’ are Bulgaria, Croatia, Romania, Serbia and Slovenia. The overall picture is still very optimistic, but the expansion rate of the total construction market has been revised a bit downward, mostly due to the worsened expectation in EU fund absorption on the forecast horizon. This affects largely the civil engineering submarket, where 9% cumulated growth is foreseen for 2018-2019 for the region as a whole. In a very favorable macro environment where money is cheap, building construction is set to continue to recover; with a 17% cumulated market growth predicted for the upcoming 2 years. Shortage of skilled labour in construction is a major constraint of a more rapid growth, though. 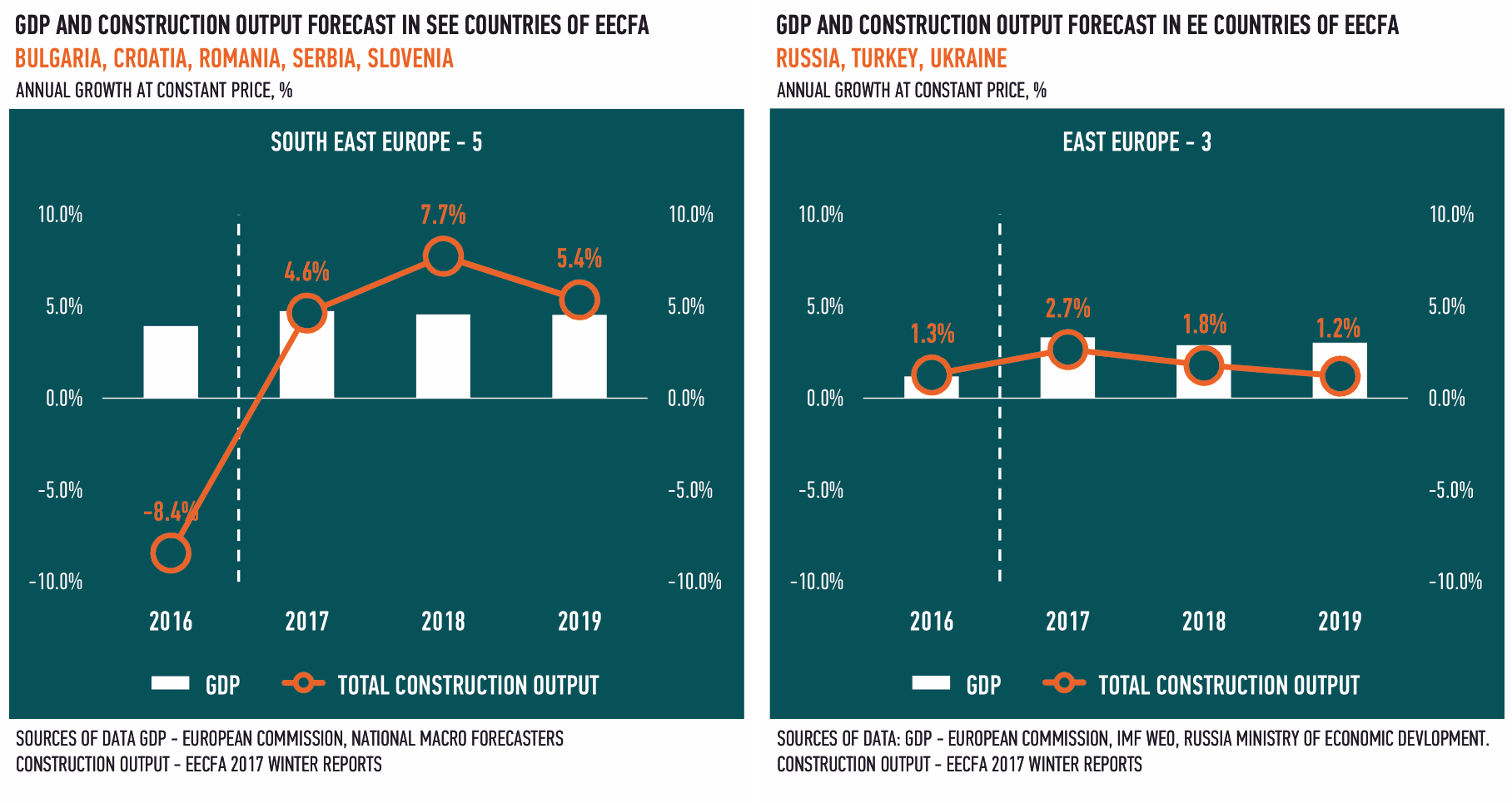 Croatia: the good news for construction growth in Croatia is the country’s increasing capacity to obtain EU funds, at which the current government seems to be getting better and better. Continued strong growth in GDP, private consumption, retail turnover and industrial production should also benefit construction. Total construction output growth is estimated to be 6.3% for 2017, which has been revised down from the 11.2% growth expected in summer due primarily to caution shown by buyers, bankers and developers in the residential segment and to delays in some government-led, civil-engineering projects. 2018 will likely bring a 10.9% rise in total construction output (up from 7.1% expected in summer), while 2019 should see a 3.9% expansion in this figure (also up from 2.8% estimated in summer). The Agrokor workout has not so far created major problems for the Croatian construction industry, but it remains a danger, and if mishandled could have a strong, negative impact.

Romania: the excellent performance of housing and the growth in the non-residential segment in Romania are expected to have counterbalanced low civil engineering outputs in 2017, and to have helped consequently total construction output hopefully embark on a 3.6% increase this year. But this is below the 4.3% growth expectations this summer owing to the lower-than-awaited EU fund absorption rates in the first half of the year. Outlook for 2018 has been revised a bit down to +6.8% (+7.6% forecasted in summer), while 2019 is now prognosticated to see a larger expansion in construction performance (5% instead of 1.8% anticipated earlier) as the civil sector is thought to correct back due to new motorway construction works in that year.

Serbia: its construction market holds a potential for a real success story: building construction – both new and renovation – gained record-high steam in 2016 on the back of tailwinds from the permit reform launched in 2015. There is a visible convergence of the effects of this permit reform and the economic recovery, which brings along substantial rises in construction across the board. 2017 will likely witness a 3.3% growth (down from the 12.1% predicted in summer), 2018 will probably register a 16.3% expansion (up from the 12.9% forecast in summer) and in 2019 the rise will consolidate with +7.3% (compared to the 9.2% projected in summer). Downward revisions derive from the fact that construction start of certain big-league projects in the non-residential and civil engineering segments has been delayed, resulting in weaker-than-expected results in 2017 and stronger growth in 2018.

Slovenia: in 2016 its construction slumped by 10.3% (against the predicted 9%) due to the shrinkage of EU funds in the transitory year. Forecast for the year 2017 is a more cautious 6% now at the end of the year (over the 9.6% forecasted in the summer). The years ahead look also less optimistic now: in 2018 an 8.2% growth should follow (down from 10.1%), whereas 2019 should see a 7% expansion (compared to 16.1%). In part, uncertainty comes from the civil engineering segment where delays in construction start for two high-volume civil engineering projects should not contribute to growth before 2020. Also, downward revisions coming from official data in residential construction values between 2015 and 2018 have changed the picture in the forecast horizon. 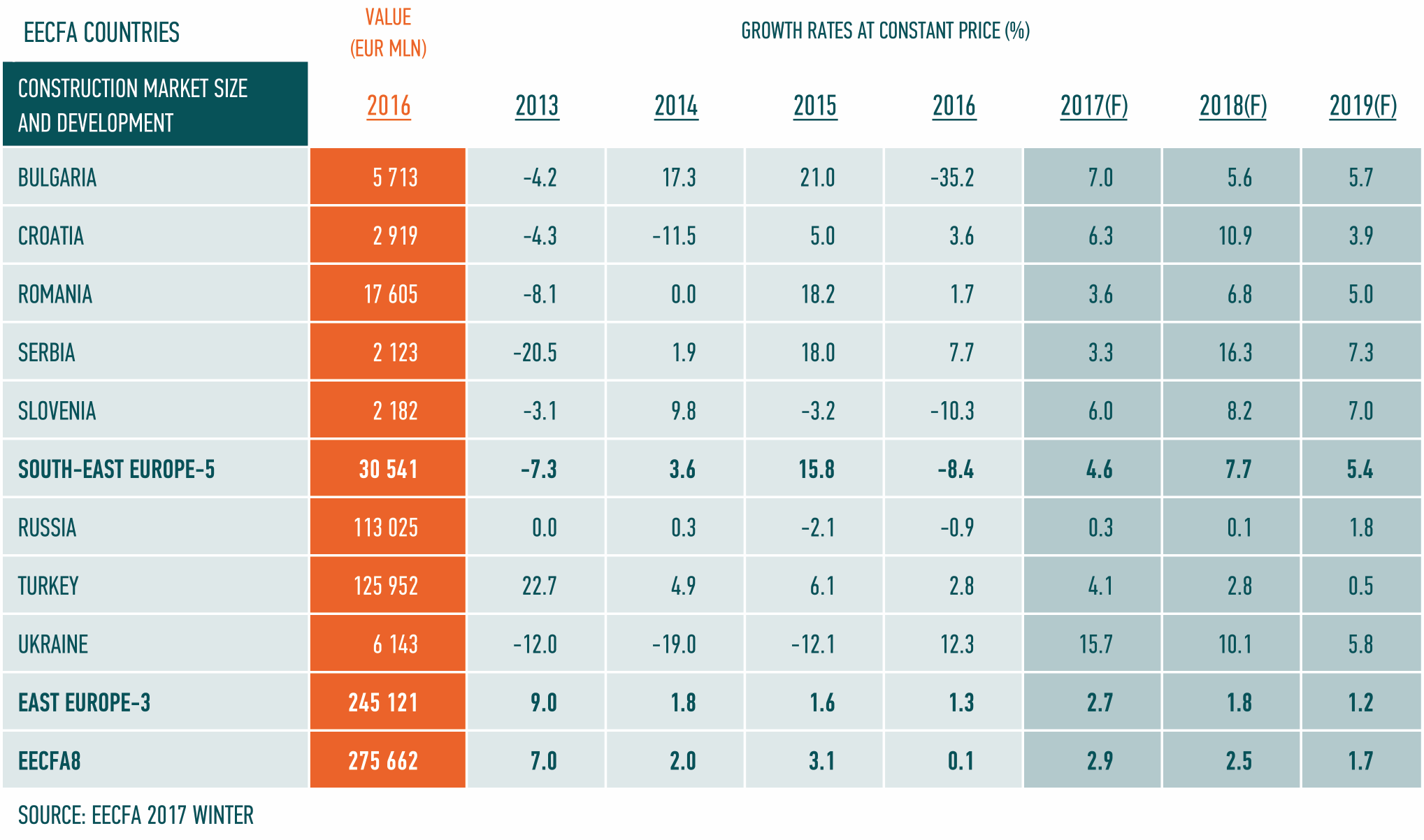 Construction outlook up to 2019 in Eastern Europe: ‘East Europe-3’ refers to the three large countries: Russia, Turkey and Ukraine. Very moderate optimism is expressed in the current forecast for the construction market of Russia, Turkey and Ukraine as a whole, as we revised our previous forecast upward. State intervention and regulatory changes can curb the fall on Russia’s residential market, while civil engineering is expected to perform better than predicted half a year ago. In Turkey, building construction submarket has been revised moderately upward. Here the mix of strong demographic trend, all-time high permit figures and a fragile situation on the financing side made us cautiously optimistic. Cumulated growth for the whole region’s building construction is near zero for 2018-2019, and civil engineering is forecast to expand 8%. Ukraine is about to outperform region averages on both submarkets.

Russia: even though a 2.5% shrinkage was foreseen for the whole construction market for 2017 in the summer, it is now estimated to register a growth of 0.3%. In addition, despite the 0.8% decrease predicted for 2018 and the 0.2% drop anticipated for 2019 in construction in Russia in the summer, expectations now are fully positive with +0.1% for 2018 and +1.8% in 2019. Optimism for the years 2017 and 2018 derives from the awaited increased growth in the civil engineering sector fuelled by new high-volume projects in road and pipeline constructions. And the year 2019 is positive given that the residential segment will likely be well in the positive, benefitting construction output, fed by an easing mortgage market with low interest rates, legal reforms on new housing and solid housing demand. The successes of the entire construction sector in 2017 are also closely related to the overall improvement of the macroeconomic situation in Russia and the final overcoming of the crisis. The forecasted stable development of the national economy in 2018-2019 (albeit at a moderate pace) will also be the basis for further growth in the real estate market.

Turkey: it is a regional heavyweight by still producing the greatest amount of housing (in total floor area) all across Europe; and Q3 2017 permit data are showing all-time highs in housing production. This is why, forecast for the whole construction market looks brighter now for 2017 and 2018 than in the summer: construction is set to undergo a 4.1% growth in 2017 (rather than +1.4%), and +2.8% in 2018 (rather than +0.8%). In 2019, only a 0.5% growth is predictable for the construction market, (instead of +1% forecasted in the summer), because general and local elections will be held in that year and rising construction costs may lead to reduction in demand. On an interesting note, TUIK, the Turkish Statistical Institute, had been working on harmonizing its GDP calculation method with the most recent international standards from 2013 on, and published revised figures at end 2016. After this revision, construction market size was measured twice as big for 2015 as considered earlier: before the revision, construction investment was recorded as TRY 180bln for the year 2015; while after the revision it is measured as TRY 380bln. TUIK is going to publish construction production index in 2018 after one-year recess that was held for revising its method of calculation and data source.

Ukraine: considerable growth in construction market indicators registered throughout 2017 suggests that the industry has weathered the crisis and is on a development path. Construction turned out to be the fastest growing industry of the Ukrainian economy in 2017 due to a major hike in road construction, the improvement in the financial condition of several industrial players, and the increase in investments. All this has led to a significant upward revision in construction output in the country for 2017: from 7.7% predicted in summer to 15.7% expected now. Expectations for 2018 are also better with a 10.1% growth projection in construction instead of the 8% awaited in summer, while for 2019 a decelerated growth of 5.8% should occur (lower than the 7% expansion anticipated in summer).

More details can be found in our forecast reports available for purchase.
For discount options and orders, please write to: eszter.falucskai@eecfa.com.

Sample report: http://eecfa.com/#sample_report
(an interactive map pops up, please close it to arrive to the sample report)

One thought on “EECFA 2017 Winter Construction Forecast and Revision”