EECFA has released its winter construction forecast reports on 2 December 2016. In this post you will find the concise summary on our expectations for the 8 construction markets we are dealing with: Bulgaria, Croatia, Romania, Russia, Serbia, Slovenia, Turkey and Ukraine. You can also find us and our reports on eecfa.com. 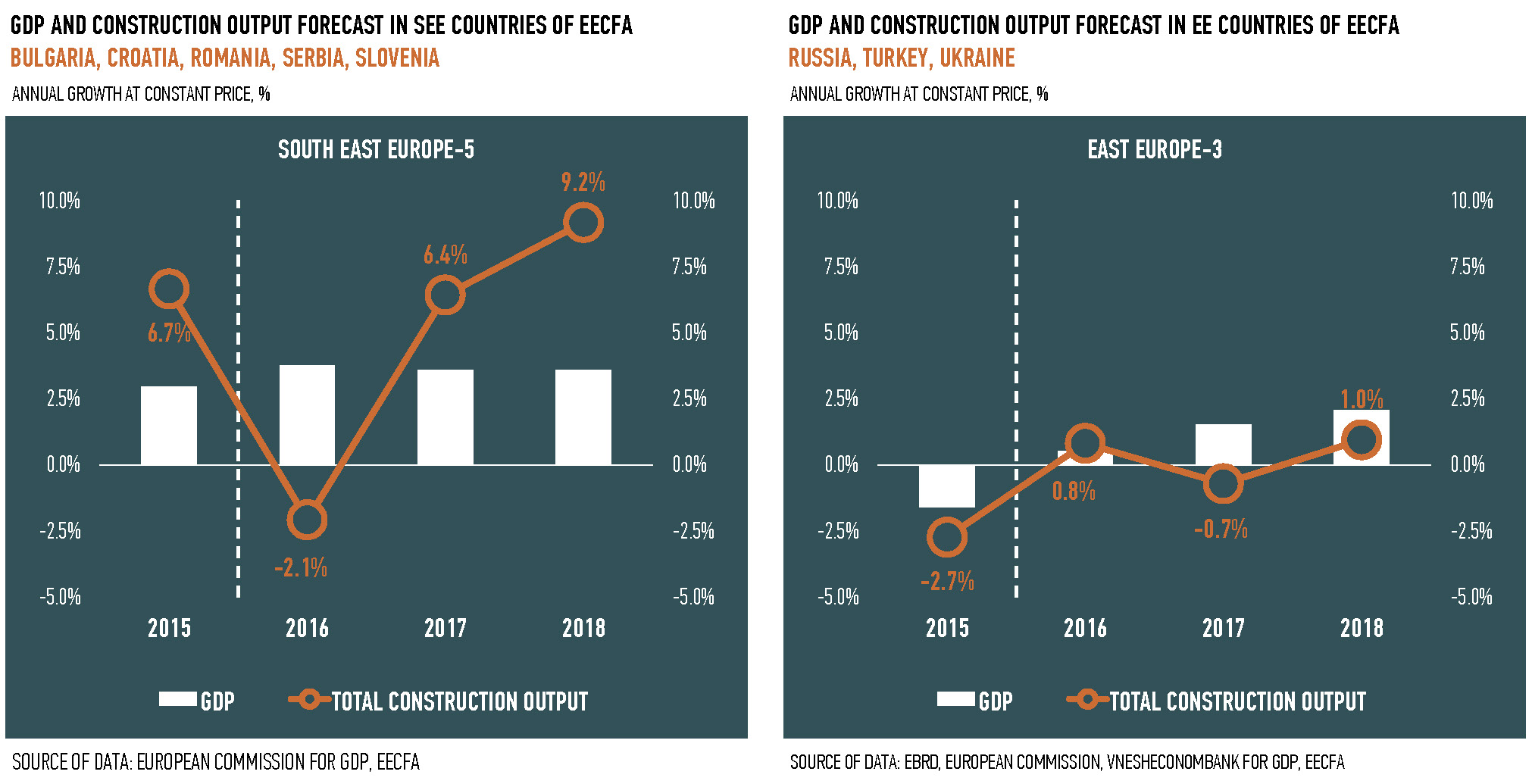 South-East Europe is very optimistic. After the transitory 2016, when shrinkage in the civil engineering market in the EU countries of the region dragged down the region’s total performance, high growth is expected to characterize the total construction market in the upcoming years. Each EECFA country of the region predicts an expansion beyond 5% for 2017 and a further increase for 2018. Building construction, coming back from low levels, is predicted to expand faster than civil engineering in 2017.

Eastern Europe is at a standstill as a whole. In Russia, we expect a prolonged decline. The total construction market is not predicted to expand before 2018, and we believe that the growth of civil engineering sub-market can only alleviate the loss awaited in building construction in 2017. In Turkey, our stories for the upcoming years is rather similar to that of Russia, slight optimism in civil engineering, slight pessimism in building construction leads to a total market which is not predicted to grow until 2018. In Ukraine, all-round recovery is forecasted. From the very low levels, we expect relatively high growth rates for 2017 and 2018. 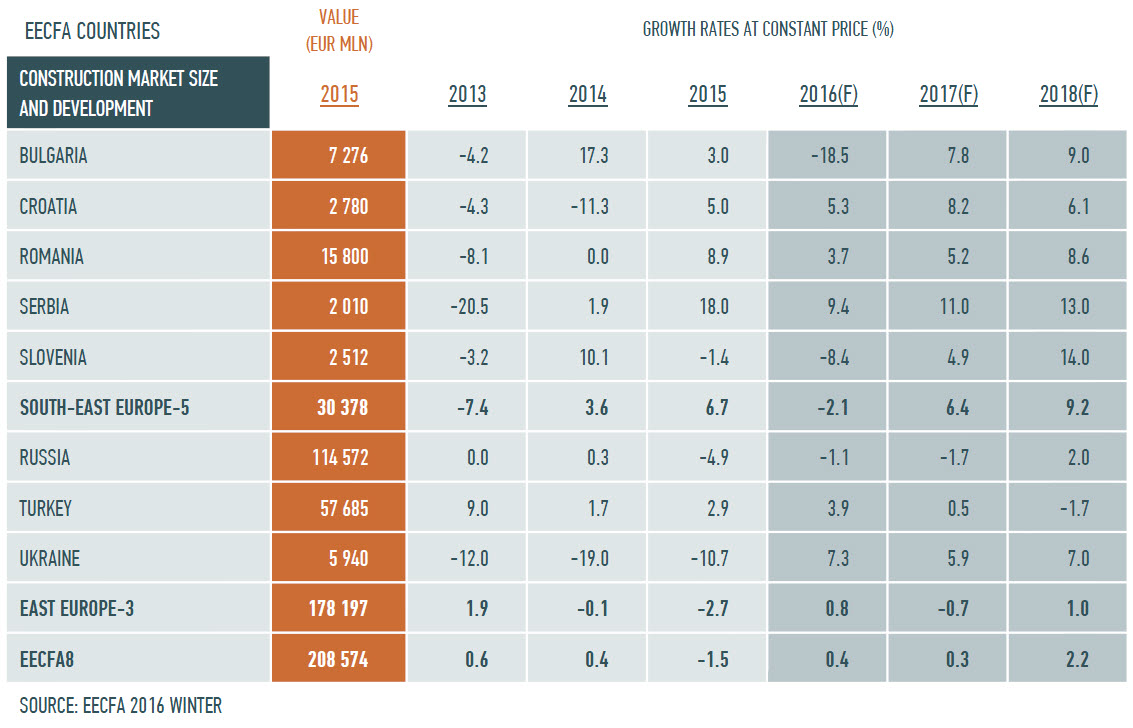 Romania’s total construction output growth for 2016 has been slightly revised up to 3.7% from 3.4% (summer forecast) given by the more optimistic indicators in the residential segment, the better performance in industrial and logistical construction, and finally, the growth in activity in road construction. 2017 is anticipated to register a growth of 5.2% (against 6.6% forecasted in summer) with civil engineering expected to underperform due to an expected lag in the implementation of major projects, following the current election. For 2018, an expansion of 8.6% is awaited now in the overall construction in Romania (compared to the projected 6.9% in summer), mainly driven by residential construction exceeding growth rates of 10%. The reasons comprise historically low mortgage rates, favourable government policies and a market attracting more speculative development.

Construction output for 2016 in Bulgaria has also been adjusted a bit: instead of -18.9% predicted in the summer, now -18.5% is estimated for the year given the better-than-expected performance in office and industrial segments. The massive drop for the year, however, is caused by civil engineering output dragging down the whole construction sector due to the sluggish absorption of EU funds. The economy is indicating positive dynamics driven by private consumption, but risks may arise from the stepping down of the government. Until the next elections in spring 2017 the temporary government will probably not take major decisions affecting infrastructure projects. Output for the construction sector for 2017 has been revised downwards: a growth of 7.8% is expected for 2017 (against 14.7% predicted back in summer), whereas now a bigger growth of 9% is projected for 2018 than in summer (5.1%).

When it comes to Croatia, the most significant revisions to the forecast were for 2016: total construction is now projected to grow 5.3%, down from the rise of 6.1% anticipated in summer. The lesser growth results from a major downward revision in the office construction segment resulting from considerably greater than expected completions in 2015 – and especially 2014. This in turn both caused far less work to be done on existing projects in 2016 than previously estimated and also significantly raised the base from which 2016 growth is calculated. Nevertheless, within the forecast horizon the construction outlook seems brighter. Economic growth has greatly exceeded previous expectations and is likely to continue to be strong. A stable, competent government has just been formed. Most important, Croatian public and private entities are increasingly familiar with the procedures for obtaining EU funds, which will greatly raise the utilization of these funds. Construction should accordingly record 8.2% and 6.1% growth in 2017 and in 2018, respectively.

After the 2015’s reform in permit procedures, Serbia’s market entered a real boom of permits in almost all construction segments. This laid ground for expected massive volume increases in 2016, with even more optimistic outlooks for the forecast. Predicted construction performance for 2016 has been adjusted to 9.4% growth (from a 12.1% rise in summer); whereas for 2017, now 11% expansion is anticipated (over 12.3% in summer). For 2018, outlook has been substantially revised upward with 13% growth (against the summer 5.3%). The brighter forecast comes from the fact that Serbia has massively decreased state deficits (from 7.5% in 2012 to 1.5% in 2016), suggesting an easing austerity and increased public investments from 2017 on, which will certainly provide another boost for growing construction outputs.

Slovenia’s construction output is forecasted to decrease in 2016 by 8.4 % – in line with our previous forecast. The reason for the falloff is the decrease in civil engineering output in 2016 deriving from less available public financing for investments as a result of less EU financing available at the beginning of the new financial perspective. However, the underlying positive trends, especially in residential construction, will lead to the increase of the overall construction output by 4.9 % in 2017 and a much larger increase of 14 % in 2018. The 2018 forecast is more optimistic than our previous one. The increase will depend on major investments in civil engineering, especially the expansion of the railroad network that is forecasted to start in that year.

Russia’s economy this year has been in a difficult situation: internal and external conditions alike have rather been complicated, with a likely continuation in mid-term. This will directly impact the construction segment, which in 2016 posted the biggest downturn in business activity in the last ten years. However, total construction output forecast for 2016 has been changed to a minor drop of 1.1% in the sector from a slump of 5.3% forecasted in summer. The explanation is that civil engineering seems more optimistic now and housing seems less pessimistic than in summer. Construction projection for 2017 remains the same: -1.7%, while for 2018 it has been revised upwards: from +1.2% to +2%.

In Ukraine, following two years of recession, 2016 shows growth in the economy. Key drivers in the course of the year have been trade and construction, the latter having survived on the back of the residential sector. More optimism has caused upward revisions in outputs of construction; for 2016, a 7.3% increase is predicted (from the 5.1% rise awaited in summer), while for 2017 the 4.6% upturn was changed to 5.9% now, and for 2018, an even bigger upswing is anticipated: 7% (winter forecast) from 4.7% (summer forecast).

Although Turkey’s economy has been shaken due to the failed coup attempt on 15th July, building starts and completions in the July-September period are not much affected; in 2016, construction market development should record a bigger rise (3.9%) than expected in summer (2.4%). When it comes to 2017, growth should be about 0.5% (over the 1.6% of summer forecast) and the year after should bring a decline of 1.7% compared to the +0.1% predicted in summer.