Office has been struggling to sustain steady growth as its output performance surprisingly meandered in the previous period. Finally, investments are picking up, but will it be enough to improve market conditions?

Although Serbia’s office segment has been enjoying positive developments during the ongoing expansion, its performance has been rather bumpy and below market expectations. The initial strong recovery of construction outputs in 2016 had a short breath and corrected back by a double-digit margin in the following year. This was not expected in any way since permit numbers continued surging unabated, while investment-wise all market conditions improved further.

The sudden decrease in 2017 was largely caused by the delay in two major planned projects in Belgrade which had received their permits, but construction start did not follow as planned. With its small base and still recovering outputs, this was enough to produce a significant delay in new deliveries and sway outputs of the entire segment.

Unlike other regional centers, the Belgrade market is still underdeveloped and substantially behind in stock size owing to a delayed transition and the lack of institutional funds and developers from the EU that already invested in Central and Eastern Europe. Because the downturn of 2008 and 2009 reduced financing, most office projects have been developed in a pre-leased manner, thus keeping vacancy at a constant low and rents at a stable high. Consequentially, the costs of renting class A office in Belgrade can go 40% higher than its regional peers such as Zagreb or Sofia.

The construction of office buildings has again accelerated in 2018 and 2019, and the project pipeline is slowly entering realization, meaning that new deliveries should start increasing the modern stock by a significant rate in the coming period and vacancy could also temporarily increase. Having in mind the very propulsive take-up figures in the last three years, there is no fear of a prolonged vacancy at the moment. Belgrade is the largest market and there was only 10.000m2 of new stock delivered in 2018, making a tiny contribution to the total of 860.000m2.

On the other hand, several larger projects entered realization in the same period, so another GLA 120.000m2 is under construction in Belgrade and will enter the market in H2 2020. The gap between demand and supply is already very wide and although bigger projects entered construction, it will take time for new offices to become available. Furthermore, most new projects will be leased before or during construction, so, the effect, if any, on the rent costs should be very limited in this cycle. Pressures on the demand side are set to remain strong in mid-term, so more investments will be necessary if Belgrade is to keep its regional competitiveness.

END_OF_DOCUMENT_TOKEN_TO_BE_REPLACED

Residential construction in Serbia is performing extremely well, and the long-awaited recovery is now well underway, with 2018 volumes again surpassing initial expectations. The situation on the market has been brewing for some time, with a strong investor confidence as well as very favorable financial conditions fueling expansion.

There has been a steady growth in construction activity for 4 years in a row now, but this trend has all the necessary conditions to sustain these levels and produce more growth in the coming years. Housing construction is flourishing, being already one of the best performing sectors in the overall building construction.

New projects are lining up, boosting permit numbers to record levels. Although it is expected for permits to hit the roof in 2020, the amount of permitted homes will certainly drive this growth cycle for several more years.

Serbia’s residential market though is coming from a very low-end of its potential – hitting historical bottom after a long and very deep recession that ended in 2014. With such a small basis at the time, an upswing was expected in construction volumes, but the current strength and speed of the recovery seemed too optimistic.

Investment activity has accelerated, with the strong contribution of both domestic and foreign investors, creating a real boom in the construction of multi-unit buildings. Investors from around the world have already entered the market, particularly Belgrade’s starved luxurious segment and yielding high-end residential projects. The competition of large-scale projects by international and domestic investors is bringing a whole new level of market sophistication, with different services, features and amenities.

The most notable is the Belgrade Waterfront development, a large-scale re-urbanization of the banks of the Sava River in Central Belgrade, covering 80ha of prime construction land. This project is a joint venture of the Republic of Serbia and Abu Dhabi-based investment fund ‘Eagle Hills’, estimated to be worth more than EUR 3bln. END_OF_DOCUMENT_TOKEN_TO_BE_REPLACED

Serbia’s retail segment is enjoying a robust growth in the number of permitted buildings due to the permit reform introduced in 2015. With the first phase of the reform having commenced in 2015, and the second phase having been set out in 2016, the application procedure for permits has been made fully electronic in order to have full transparency. Consequently, not only did Serbia gain a better position in The World Bank’s 2016 Doing Business list, but is now seeing a new investment cycle of the construction of high-volume international-type shopping malls. The start of such several big-league projects should sustain this growth cycle and give a boost to construction volumes in the years to come.

In an effort to improve investment climate, permit procedures in Serbia were marked as a one of the main regulatory obstacles to development, with a long line of inefficient procedures and corrupt instances suffocating the economy. Before the reform was introduced, in some cases, it took almost a year to acquire a building permit, even if all legal conditions were met. During 2015, the government presented a multi-phase reform, which would include a total overhaul of the procedures, resulting in far cheaper and much faster permit procedures. Its implementation started in late 2015 and so far, it has been a resounding success, with building permit applications now being processed in just a few days. Furthermore, the second phase of the reform implementation started in January 2016, with building permit applications now a fully electronic system in Serbia. With electronic and centralized applications, the reform aims to lower the number of instances and the possibility of corruption and hush money in the process. This significant regulatory reform helped Serbia swiftly boost its ranks in the World Bank’s ‘Doing Business’ list, and from 91st in 2015 it reached 47th position in 2016, making it one of the most improving economies of the world in 2016.

With some anticipation of investors, new permit procedures resulted in a strong spike of permit numbers across the board. Practically all construction segments have seen their share of growth, but with almost two years into implementation of the new permit laws, some construction sectors are leading the way. It seems that the retail segment forwards as main beneficiary in building construction, with a very potent investment cycle carrying almost 1 million permitted square meters in just over two years. Coming from a very low post-crisis level, this several-fold increase of permitted retail buildings created a real sector’s boom. The reasons behind such a strong reaction of investors lay in a very opportunistic market, open for development of big city malls and retail parks. It is worth END_OF_DOCUMENT_TOKEN_TO_BE_REPLACED

We have released our summer construction forecast on 16 June 2017 on Bulgaria, Croatia, Romania, Russia, Serbia, Slovenia, Turkey and Ukraine. This post intends to summarize the most important projections for these construction markets for the years 2017-2019. These are our main findings; for a deeper understanding, please consult our reports. You can contact us on eecfa.com.

Outlook for the EECFA regions

The highly optimistic outlook for South East Europe is maintained by EECFA. Leaving behind the transitory 2016, when the absorption of funds available in the new EU programming period (2014-2020) was still at a low level, the upcoming years are characterized by a bigger expansion of the construction market than that of GDP. Building construction is predicted to well outperform the total market, with a yearly average rate of 9% over the horizon. The small growth in the region’s total civil engineering market is attributed to the negative expectations in Romania. 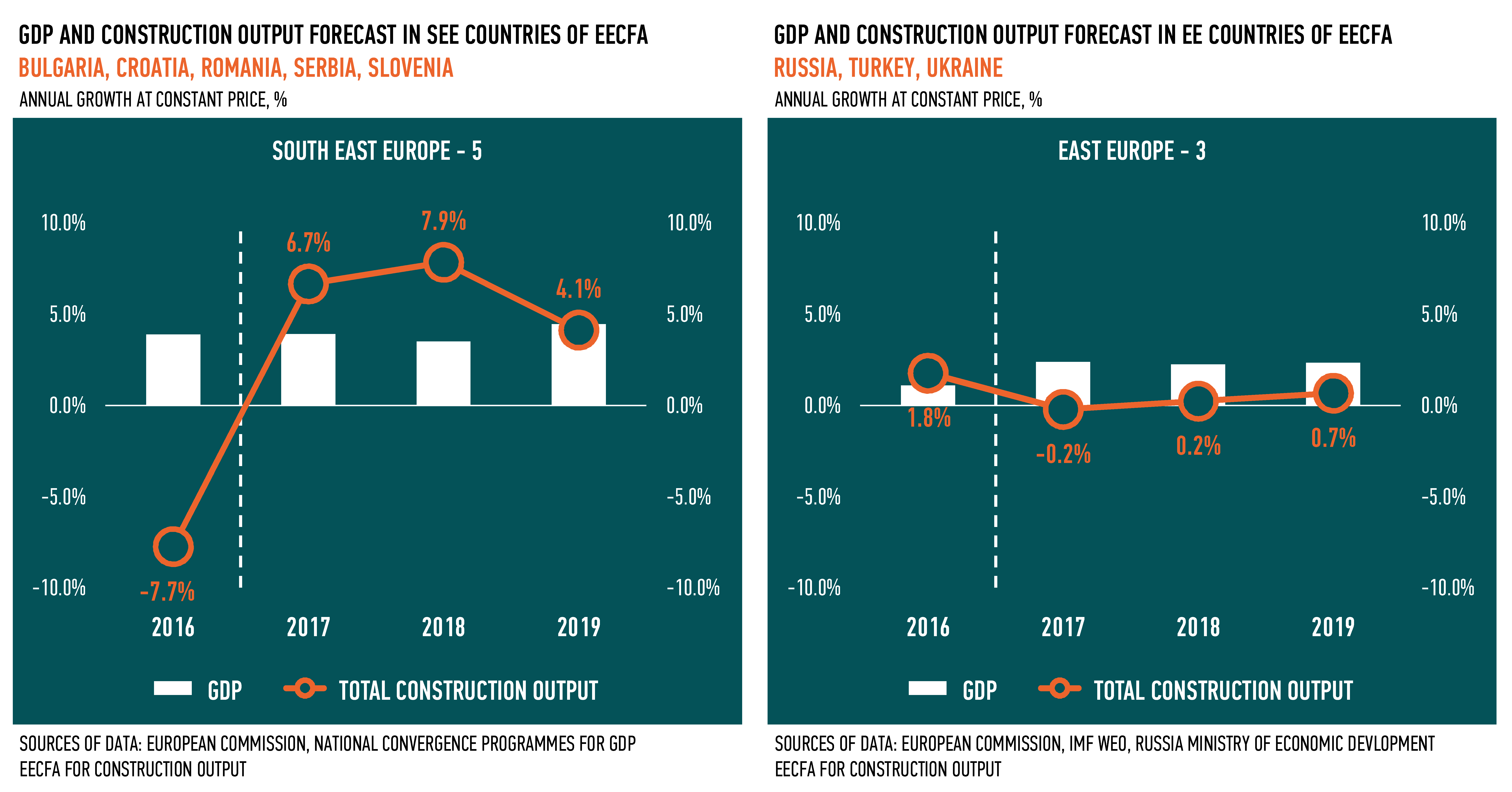 Sideway moves, no further market expansion on the horizon are what we consider the most probable scenario for the 3 East European markets together. Turkey and Russia, being far the two biggest markets we cover in EECFA, is expected to show some similarities. In both countries our forecasts are moderately optimistic in the civil engineering market. While in the building construction market the outlook is clearly negative for Russia and neutral for Turkey. In Ukraine, the recovery experienced in 2016 is predicted to be sustained until 2019. Both building construction and civil engineering could expand further with a relatively good pace. END_OF_DOCUMENT_TOKEN_TO_BE_REPLACED